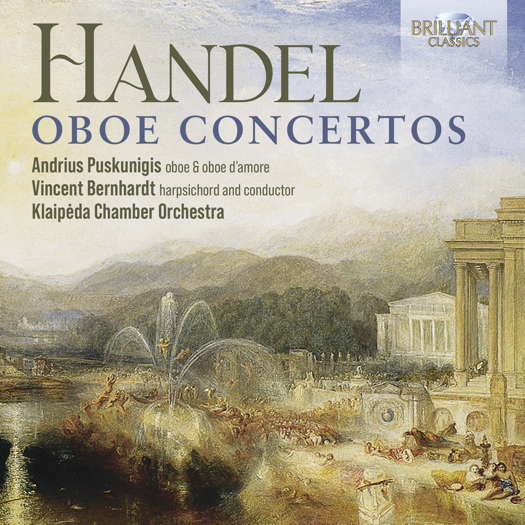 No booklet supplied with review material.

This album is devoted to Handel's concertante music for solo oboe, of which only a few concertos have survived. He was particularly fond of the instrument and assigned many solos to it in his oratorios, operas, concerti grossi and sonatas. He is even reported to have said of his early oboe works: 'I used to write like the D-v [Devil] in those days, but chiefly for the oboe, which was my favourite instrument.' His some twenty concertos for a solo instrument are mainly for the organ and include just one violin concerto and three oboe concertos (HWV 301, 302a and 287). The latter, featured here, is the best known, as it also appears transcribed for other instruments. Further concertos for oboe have been attributed to Handel by the musicologists Fritz Stein and Fulvio & Sandro Caldini: one in E flat major and two more, both presented here in world-premiere recordings, in C minor. The six Concerti grossi Op 3 form the first printed collection of Handel's orchestral compositions. Formerly known as the 'oboe concertos', the volume was published by John Walsh in 1734 – not necessarily on the composer's own initiative – from a variety of pieces composed over a period of some twenty years. The orchestration in the Walsh edition is particularly unconvincing, with numerous octave doublings and a virtual absence of elements typical of the concertante style. Vincent Bernhardt has therefore proposed a new instrumentation, organised according to the principle of dialogue between groups that characterises the concertante language of this period. An improvised theorbo prelude precedes the work. To extend Handel's oboe repertoire the artists have fashioned two concertos, for oboe and oboe d'amore, out of eight selected movements that are essentially built on castrato arias from the operas, a practice in line with the pasticcios created in Handel's day.