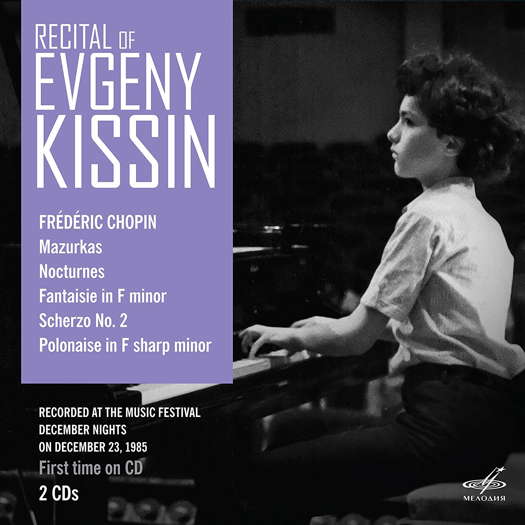 'From the very beginning of his career at the top of his game, Evgeny Kissin presents a performance that is, simply put, wild.'

While listening to this CD a constant feeling of astonishment follows. At once your eyes see the picture of a fourteen-year-old child and your ears hear somewhat of a music genius, possessing that child and bringing the qualities of a fully established and emotionally mature pianist to the fore. From the very beginning of his career at the top of his game, Evgeny Kissin presents a performance that is, simply put, wild.

The monumental, two-part CD explores different pieces by Romantic era pianist Frederic Chopin - Mazurkas, Nocturnes, Fantaisie in F minor, Scherzo No 2 and the Polonaise in F sharp minor - that Kissin took on for one of his first recitals at the 'December Nights' Festival at the Pushkin State Museum of Fine Arts. Even though the repertoire is a huge technical challenge for any pianist, it requires high sensitivity of an ear, combined with depth of emotional expression. As another great Russian pianist Daniil Trifonov once said about the music of Chopin: 'This music doesn't have a thick skin, it is always close to the nerve.' This must have been a huge challenge for a fourteen-year-old pianist, only discovering his own personal emotional nuances. Nevertheless, Kissin delivers it all in this performance, wowing with an interpretation rich in both high sensitivity and depth of expression. The recital showed his unwavering maturity and created ripples about the new musical genius entering the world stage. The ripples of Evgeny Kissin's playing are affecting listeners around the world even today, thirty-six years later.

All of the pieces in the recital have the nostalgic nationalist and patriotic sentiment of the composer - the Polonaise, Mazurkas, Fantasie. They were composed after the time when his homeland Poland was lost in the wake of the failed Warsaw uprising of November 1830 and the new ideas of Nationalism were on the rise.

The first CD starts with the Fantaisie in F minor - a piece being described emotionally rather than technically as one of the most complicated of Chopin's works, characterized by a vigor and gesture worthy of the loftiest affairs. This microcosm for me is the jewel of the recording. The pianist does not shatter in front of a range of technical challenges, displays concentration and plays with a rich full sound, conjoining the phrases with warm legato.

It is known that eleven-year-old Evgeny Kissin asked his only piano teacher, Anna Kantor, to give him Chopin's mazurkas as a summer assignment. Traditional Polish folk dance here was merely a model, while romantic composer transformed them into an entirely new genre. The Polish folk tunes incorporated into Chopin's Mazurkas come alive fluently in the hands of this Moscow-raised child prodigy. They are strong in their clarity of articulation and tempo. One can hear everything that is happening in the performance - every note, every passage, every phrase. And every color, pouring out of these characteristic dances, picturing with his music the bright memories, filled with a haze of melancholy.

Chopin's nocturnes are considered among the finest short solo works for the piano, even today holding an important place in the contemporary concert repertoire. Ambitious Evgeny Kissin chose to perform the following: Nocturne in F sharp minor, Op 48 No 2; Nocturne in C sharp minor, Op 27 No 1; Nocturne in A flat major, Op 32 No 2; and Nocturne in G major, Op 37 No 2. They all have in common the fluidity of musical thought: non-interruption of the phrase; the imperceptible gliding from one melodic proposition to another.

The opportunity to demonstrate his full virtuosic and artistic potential rises with the Scherzo in B flat minor. The piece is being vividly described as a journey from darkness to light focus, a 'fulminating' at the piano, documenting an eruption of emotion stronger than anything Chopin had ever expressed before. It marks a new period of maturity for the composer, when he refused virtuosity for virtuosity's sake, broke down the traditional structure of the piece and explored both the deep-felt lyricism and the concentrated drama. Evgeny Kissin masters the musical drama, adding dynamism of his own, bringing forth the unfurled, forceful, emotionally charged performance.

At the recital, Evgeny Kissin performed the Polonaise in F sharp minor for the first time publicly. This composition stands out by a different character, marking more the music's contours than colors writing sharp, distinct and resolute rhythms. Informing the Viennese publisher Mechetti, Chopin described the piece: 'It is a kind of fantasy in polonaise form. But I call it a Polonaise'. Its full, alive and dramatic interpretation becomes a culmination worthy of this recital.

Even though the finale of Chopin's Piano Sonata in B minor, Op 58, has a classicistic structure, it is filled with Romantic music. The piece is mostly known for a serious emotional charge, almost like a sound of stormy obsession. Evgeny Kissin takes on the challenge and brings his most technical capacities and emotional maturity to the stage.

A year before this recording, in 1984, Kissin's recital at the Grand Hall of the Moscow Conservatory (performing Chopin concertos) was broadcast by the All-Union Radio and the whole country started to speak about the child prodigy, attracting the attention of both the public and the experts. 'When I tell them about this child prodigy in my country, they won't believe me. But he's there! I saw and heard everything', wrote American pianist and teacher Daniel Pollack, afterwards. Even in his youth, Kissin has already reached a high level and mastery to be compared with some world-famous figures. His recital recordings in 1984-1986 were sold in huge numbers and are continuing to be republished nowadays.

It comes as no surprise that today, Kissin is commonly viewed as a great successor of the Russian piano school because of the depth, lyricism and poetic quality of his interpretations. Similar to Frederic Chopin, who has maintained worldwide renown as a leading musician of his era, Evgeny Kissin, even today, is widely championed for his virtuosity and depth of interpretation of Romantic piano repertoire, with the music of Chopin being constantly under his fingers.

The background image on this page has been derived from the 1833 oil-on-canvas painting Natolin Park with Dutch farm by Polish painter Wincenty Kasprzycki (1802-1849).