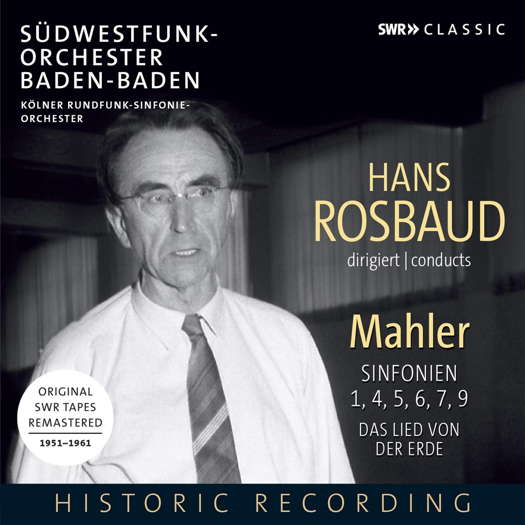 'Rosbaud ... lays out the whole range of Mahler's passion with a fiery sense of musicality.'

Gustav Mahler (1860-1911) was one of Hans Rosbaud's great loves. Although he never succeeded in recording all Mahler's symphonies or the song cycles, what we do have speaks for itself and demonstrates that, as an all-round musical genius, Rosbaud was not only one of the most significant Mahler conductors of his age, but one of the best ever. He does not just reveal the structure of the works to perfection and with the utmost sincerity to the scores, but also lays out the whole range of Mahler's passion with a fiery sense of musicality. Each moment is given an individual expression, and the huge dimensions of the symphonies are laid out with detailed perceptibility.

Hans Rosbaud (1895-1962) is also remembered as the defender of new music, and it was through his audacity that Schoenberg's Moses und Aron saw the light of day. From what Pierre Boulez said about Rosbaud, the maestro turns out to be a very humble man, but at the same time he was a fanatic for work, and it is this serious passion for music, this mixture of undivided attention to the slightest detail, that makes these interpretations a timeless creation.

In the First Symphony the maestro seems to be slightly hampered with the reduced forces at his disposal and one feels he cannot adequately translate his vision of the piece. Nonetheless, the haunting sounds of nature in the first movement, the irony and tenderness of the third, and the venom and grandeur of the Finale spiced by the lyricism of the second and fourth episodes, make this version one to savour.

The Fourth, with Eva Maria Rogner as soloist, is beautifully shaped, particularly in the third and fourth movements, where the longing for celestial bliss is all too evident, despite the brevity - eight minutes - of the closing chapter.

The mighty Fifth is a leading version which alternates between a mournful beginning and an explosive ending of the final 'Rondo'. In between there is much to uplift the spirit, particularly the immortal 'Adagietto' which, in Rosbaud's hands, sounds absolutely enthralling.

The Sixth is probably Mahler's most personal work. Indeed, during its composition the composer suffered three great hammer blows: the diagnosis of his heart condition, the death of his young daughter and the termination of his directorship at the Vienna Opera. All this pain and anguish are powerfully described in the music, particularly in the first and last movements where Mahler uses to great effect a palette of nuances and timbres with a subtlety that is engrossing throughout. Rosbaud captures all this emotional turmoil with incredible insight, and his searing interpretation remains one of his foremost achievements on record.

According to the composer himself, the Seventh is his best work, although others may differ. Michael Kennedy refers to it as a 'complex, extravagant, highly sophisticated and mercurial piece which runs the risk of either being accepted immediately or discarded at once'. Those who do accept it are in for some astonishing music and I recommend this version, despite the rather average sound. The symphony has a haunting unity and, contrary to what some critics believe, its progression of Night, Shadows and Dreams which dominate the music until the explosion of Day's Dawn in the Finale give it a complete sense of a balanced and structured whole. The Seventh is permeated by huge climaxes and also some chamber-like moments with delightful orchestration.

Mahler composed his Ninth Symphony when he was dying. Indeed, he was always living in a state of fear and anguish, and that is why many of his symphonies include a 'trauermarsch'. The Ninth is not only his final utterance (apart from the uncompleted Tenth) but also his farewell to the world. Rosbaud's searing and hugely intense rendition is undoubtedly his finest conducting achievement where Mahler is concerned, and each movement is laid out as close as possible to the composer's wishes. The first movement in particular is a prime example of how to find the right tempo without sacrificing anything. The second movement is despatched with an anger that sets the music ablaze. Critics agree that Rosbaud's direction of this movement is one of the most incredible ever.

The remaining two movements are also of the same engrossing level.

The Song of the Earth has the advantage of two excellent singers, Grace Hoffmann and Ernst Haefliger. The latter sings with real charm and distinction; the former will not fail to move you. Magisterial direction, brilliant playing and impressive energy give this score a poignant and often magical ambience that leaves the listener entranced.

Even if you have several versions of each work, do not hesitate to add this box set to your collection. I can assure you that you will find new reasons to be enthralled by this prophet-composer, whose music remains relevant even more than a century after his death. Beyond memorable music making.

The background image on this page has been derived from an August 2005 photograph of the sky in Worcestershire, UK, taken by Keith Bramich.