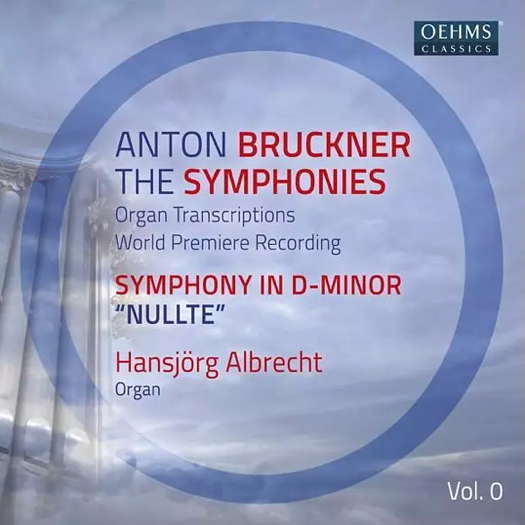 The fame of Anton Bruckner (1824-1896) rests on his symphonies, and to a certain extent, on his three Masses and Te Deum. True, his symphonic career had its fair share of letdowns, and sadly, his grand style was very often criticized, but amidst all this uncertainty, one very often bypasses the fact that Bruckner's career as an organist was one where he achieved a great amount of national and international success and recognition. His second instrument after the violin was the organ, and soon it became Bruckner's daily nourishment. In nearly every phase of his life, the organ played an important role, from his teen years in Ansfelden up to his appointment as cathedral organist in Linz. His skill for improvisation was outstanding, and this led him to be chosen as the only non-French participant in a series of concerts in Nancy organized by the organ builders Merklin and Schutze. He also performed on the famous Cavaille-Coll organ at Notre-Dame in front of an audience that included no less than Gounod, Franck and Saint-Saëns.

At this stage one may ask the question: what need could there be to hear Bruckner's symphonic canon on an instrument for which it was definitely not intended? Well, the reason stems mainly from the temptation to hear what Bruckner's massive orchestral structures sound like on 'his' instrument. Also, it is not to bring to light the spiritual and musical connections between the orchestra and the organ. It's just trying to capture the joy derived from hearing his best known (and some lesser known) works in a new guise. Along with Bruckner's works, this cycle will also include ten new compositions, specifically written to accompany each volume.

A harmonic window, borrowed from the Kyrie of Bruckner's Mass in F Minor, a piece which also reverberates in the first movement of the Symphony No 0 and the Gregorian Kyrie-invocation from the 'Missa orbis factor'.

A virtuosic piece this, where the Brucknerian harmonic shines through with ever increasing clarity, despite its short duration of just over five minutes.

The main transcription on this programme is that of the Symphony No 0, which in fact was Bruckner's second symphonic exercise. The piece was the first entirely written in Vienna in 1869 - it was preceded by the 'Study' Symphony in F Minor '00' - but compared to the other nine it sounds wildly different.

It was never published in Bruckner's lifetime and the work was officially withdrawn almost immediately after the composer had finished the composition. Despite Bruckner's own doubts, it is a stirring work and in this thrilling transcription by Erwin Horn, its many interesting orchestral details become more perceptible.

The Overture in G minor was one of Bruckner's homework assignments for Otto Kitzier, but in spite of its skillful orchestration and proper structure, it lacks originality. Still, some passages do leave a positive impression, not least because they seem to foreshadow Bruckner's future path. This early piece gets a brilliant transcription by Rudolf Innig, which sets off the programme on a rousing send off.

This first volume in the cycle is an absolutely stunning experience, if only for what it anticipates to achieve. Bruckner's symphonic masterworks were never transcribed for the organ. Now we have this marvelous opportunity to assess this great music in a totally different sound world that can be as exciting as it is awesome. Memorable performances, high-tech sonics and informative annotations complete this superb and innovative first instalment that sets my imagination alight.

One last important detail: all the pieces on this disc are performed on the magnificent Bruckner organ at the Stiftskirche, St Florian, Linz. Just cannot wait for Volume 2.

The background image on this page has been derived from the oil-on-canvas painting Sunset in winter landscape by Austrian painter Adolf Kaufmann (1848-1916).