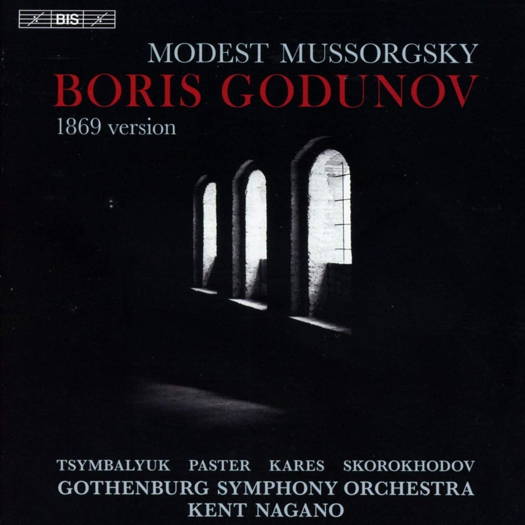 'Nagano's formidable insight is able to take the listener on a musical journey into the dark depths of the human soul. Painful, yes, but unmissable.'

After Mikhail Glinka's first Russian operas during the 1830s and 40s there was a lull in the genre. Then came the next generation of mature composers, among them the group known as the 'Mighty Five' which aimed to take Russian folk music as a starting point and wanted to bring song closer to spoken intonation. The leader of this group was Nikolai Rimsky-Korsakov who had to support the other members, to orchestrate for them and to complete their operas, but undoubtedly the most daring and progressive was Modest Mussorgsky, a flawed genius who was a victim of alcoholism and who died aged only forty-two in 1881.

His greatest opera is Boris Godunov; indeed, it is considered to be the absolute masterpiece in all of the Russian repertoire. The composer wrote the libretto himself based on Pushkin's drama and the work was completed in 1869. Mussorgsky hoped to have his piece performed soon after, but it was refused by the Imperial Theatre in St Petersburg. Today this sounds strange, but Mussorgsky's music was anything but mainstream and many aspects of the opera astounded the direction at the theatre.

The composer's unadorned style in combination with the realistic intonation from spoken Russian in the vocal parts were stylistically far in advance of their time. Another snag was the omission of a love story and no female principal. This caused Mussorgsky to add the so called 'Polish Scene' between the 5th and 6th scenes, where the false Dimitry falls in love with the Polish Princess Marina Mniszek. Because of the latter inclusion the work was now divided in a prologue and 4 acts instead of the original 7 scenes. This scene now became the 3rd act, and Mussorgsky spiced the action further with the inclusion of folk and children's songs for the 2 children of the Tsar and their nurse. A scene was also added after Boris's death in which the false Dimitry rides into Moscow and takes over the government. This version was also rejected, but the opera was ultimately performed in St Petersburg in 1874.

In spite of a moderate success, the work was sparingly performed elsewhere, apart from a Moscow performance in 1888, seven years after Mussorgsky's death. Subsequently, Rimsky decided to revise and orchestrate the work afresh, making it more traditional and colourful by mellowing a number of abrasive harmonies, and transposing Boris's lines to a brighter register. Rimsky's version was premiered in St Petersburg in 1896, and it was this version that took the opera out of Russia. By time, Rimsky's version was consigned to the drawers, and today the 1874 version is the one most frequently performed, although the 1869 original is catching up considerably. It is this original that forms the basis of this recording.

In Boris Godunov Mussorgsky paints a unique portrait of a man in a position of power, destroyed mentally by his own murderous guilt and disturbed conscience, against a backdrop of the Russian way of life in the sixteenth century. It is a grand and magnificent work, though the grandiosity is darkened by corruption and mental anguish in a way that never ceases to fascinate.

This 2017 recording is absolutely riveting, with Nagano drawing some impassioned performances that at times border on the surreal.

Nagano's formidable insight is able to take the listener on a musical journey into the dark depths of the human soul. Painful, yes, but unmissable.

The background image on this page is derived from the 1890 oil-on-canvas painting Boris Godunov and Ivan the Terrible by Russian/Ukrainian painter, sculptor and essayist Ilya Repin (1844-1930).