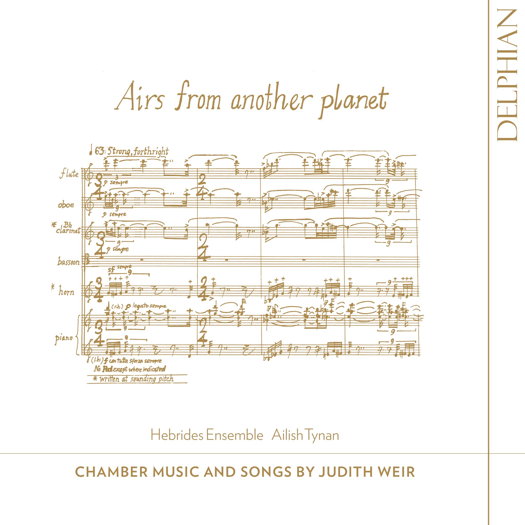 '... the polished, accomplished performances, and the readily accessible music will gain this important English composer a lot of new friends.'

This is my first real exposure to the music of Judith Weir, who occupies the prestigious position of 'Master of the Queen's Music'. This disc is quite illustrative of the wide range of styles and ideas that the composer utilises, and the works range over a thirty year period.

The first work is also one of the most recent in terms of its date of composition - 2015. I also find it to be the most easily accessible of the works on this disc. Weir has set four poems by three different African women, and the music is evocative and, like all the works presented here, very skilfully written. The poems are in order: Berceuse, Le Tam-tam, Crocodile, and Le Village. I am particularly drawn to the Berceuse and Crocodile - a lonely vegetarian crocodile that just wants friends. Ailish Tynan and the Hebrides Ensemble's performances are really lovely and polished.

Three Chorales for Cello and Piano (2015-2016) - 'Angels bending near the earth', 'In death's dark vale' and 'O Sapientia', inspired by three different sources, are interesting and contrasting, and the musical language is more complex, reflecting extra musical ideas. All works are interesting, but I am particularly fond of the third of these chorales, 'O Sapientia', which draws on a melody by Hildegard of Bingen.

The Bagpiper's String Trio (1985) is the earliest work represented here. It was inspired by the trial after the battle of Cullodin, of a captured bagpiper, and his subsequent execution, as the instrument was from that point deemed 'an instrument of war'. This work started its life as a very short 'instrumental opera' for clarinet and piano but was later revised in the form we here it on this disc. It is in three short movements: 'Salute', 'Nocturne' and 'Lament over the sea'. It is an evocative work and has a distinctive Scottish flavour, in the first and the third, melodically, and in the second one, rhythmically.

Day Break Shadows Flee (2014) is a piano solo and depicts, broadly, the effect of the early morning's emerging light chasing away the darker and slightly spooky phantoms of night. It receives an energetic and thoughtful performance by James Willshire. This is an interesting exploration of the extreme registers of the instrument.

Really? (2002) is a selection of three pieces inspired by the writings of Johann Peter Hebel and the Brothers Grimm. These works are evocative and imaginative, and Ailish Tynan's English diction is very clear and easy to follow. These are works to entertain and enjoy, and, I think, reflect the whimsical side of the composer. They would be great works for a children's concert.

The final work, Airs from another planet (1986) consists of four movements. Here the composer imagines the music that would be played by a human colony that had been isolated on a remote Scottish island as a preparation for migrating to Mars. This is a challenging work to perform, and the ensemble is certainly up to the task. The sound is clear and precise. From time to time, in this work, one can hear snatches of the original melodies, but these are distorted by isolation, and the projected time and distance and the music evolved.

This is an interesting disc providing a snapshot into some of the chamber works and styles of a very interesting contemporary composer. The recording is very fine, and the programme notes are comprehensive. It probably will not appeal to listeners who only really listen to music prior to the twentieth century, but the polished, accomplished performances, and the readily accessible music will gain this important English composer a lot of new friends.

CD INFORMATION: AIRS FROM ANOTHER PLANET

The background image on this page is derived from a detail of a 1980 NASA Viking 1 orbiter image of Valles Marineris on Mars.