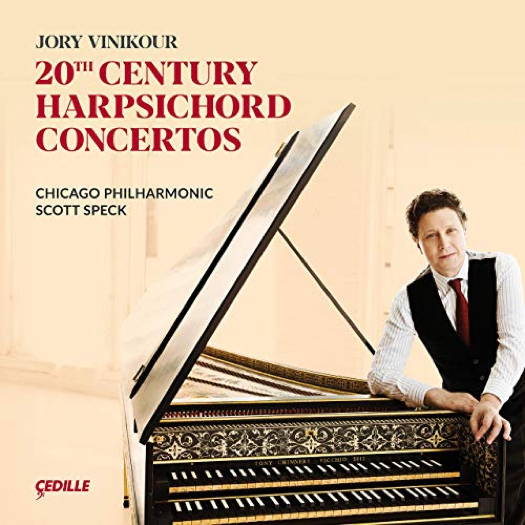 'Not many harpsichord players are as multifaceted and expressive as Jory Vinikour when interpreting modern music.'

The harpsichord was one of the most important keyboard instruments in European music from the sixteenth through to the eighteenth century. The instrument's role at that time was usually as a continuo instrument, playing a harmonized bass part in nearly all orchestral music, with the player often also conducting the orchestra. The first appearance of a concerto with solo harpsichord was in 1710 - Bach's Brandenburg Concerto No 5 in D major, BWV 1050. During the sixteenth to eighteenth centuries, the instrument underwent considerable evolution and became one of the most important and fashionable European instruments. Unfortunately, since the harpsichord is incapable of dynamic gradation, it gradually disappeared from the musical scene with the development of the fortepiano in the eighteenth century. During the twentieth century, it made a resurgence, being used in historically informed performances of older music, in new compositions, and in certain styles of popular music. Factory-made revival or twentieth-century harpsichords continued to be built through the 1990s. The course of modern harpsichord development changed. The instrument was also resurrected by prominent harpsichord players of the twentieth century, such as Wanda Landowska, Elliott Carter and Violet Gordon-Woodhouse.

One of today's brightest harpsichord players has to be the Grammy-nominated and world-wide acclaimed soloist Jory Vinikour (born 1963). His outstanding passion for harpsichord playing has been expressed throughout his life and career. After he mastered the instrument in Paris with Huguette Dreyfus and Kenneth Gilbert, he toured as a soloist throughout Europe, Asia, South America and the United States. His solo appearances have included Carnegie Recital Hall and the Baldwin-Wallace Bach Festival, performing original baroque harpsichord concertos, as well as modern pieces for the instrument. He is celebrated for his intensive artistry, subtle flexibility of expression, style, virtuosity and musicality. The attractiveness of his musicality also hides an easy and sensitive touch in the various solo timbres.

Since Jory Vinikour has performed with the planet's leading orchestras, it comes as no surprise that on this CD, 'one of the country's finest symphonic orchestras', the Chicago Philharmonic, is accompanying. This orchestra is known as a unique, musician-governed musical society. Conducted by Scott Speck, the orchestra performs with exemplary fashion and vigorous style. Since the presented pieces are all symphonic and based on early harpsichord music structure, the orchestra's collaboration with the soloist is very sympathetic and aimed towards the same musical purpose.

The first piece, Concertino da Camera (1993) by American composer Ned Rorem (born 1923) is composed in a neoclassical manner, with a slight touch of jazz and Italian tarantella music elements. It is recognizable by its French elegance and distinctively beautiful harmonies, filled with unusual chord positions that put the sound of the harpsichord in a new light. Vinikour collaborates with seven accompanying instruments, sharing the spotlight in eight parts and providing solo moments for the accompanying instruments as well. The genuine emotion in the dialogue is felt throughout the piece. Vinikour's performance is modern, very expressive and energetic. The Chicago Philharmonic musicians perform with both passion and precision. Both youthful and mature at once, this performance sweeps you right into the midst of the journey of sounds.

The brief Concertino for Harpsichord and Strings was composed in the year 1934 by English composer Walter Leigh (1905-1942). This is the composer's best known piece. Written in a neoclassical manner and neo-folkloric style, this composition could be described as a busy, yet poetic combination of the cosmopolitan and English elements of musical language. The solo performance exalts Vinikour's crisp articulation, skill, and clarity of interpretation. His expertise in playing Baroque music is especially evident here, making the recording of the piece a harmonious mixing of different incarnations of the harpsichord - Baroque, modern, local and global.

The Concerto for Harpsichord and Strings Op 42, was composed in 1975 by Czech composer Viktor Kalabis (1923-2006) for his wife, the legendary harpsichordist and childhood survivor of three Nazi concentration camps, Zuzana Růžičková (1927-2017). Such an intimate, emotionally profound piece is one of the rare twentieth century compositions that fits the harpsichord so perfectly, exploring the textural possibilities of the instrument – from toccata-like patterns to long melodic lines with slow repeated notes. The strained sound of atonalism transforms into great sensitivity and feeling in the lovely moving melodic motifs of the second part, described as a 'cry from the soul', which seems to bear the pain of oppression of the entire country. Later on, the more playful music resurfaces, and finally the piece ends in a quiet manner. Vinikour, who knew both Kalabis and his wife personally, handles every musical landscape perfectly, transcending the technical demands and delving into the emotional expression. The Chicago orchestra simply revels in Kalabis' colorful, vivid and detailed scoring, expressive harmonic palette and amazing range of color. The performance intuitively discloses the work's wealth of beauty.

The last piece on the CD is the work of Michael Nyman (born 1944). This English composer, pianist and musicologist is mostly celebrated for his movie soundtracks. His wild and thrilling Concerto for Amplified Harpsichord and Strings (1995), written in a tonal minimalist fashion, appeals with typical rhythms, shattered by tango-like interludes and a solo cadenza. No musical template could create such abrupt changes of direction, subject, and mood. Vinikour had previously performed this concerto on different occasions, so here he could really bring out the work's life and energy. This is such a gift to everyone listening.

The sound of the overall CD is wide-ranging, from neoclassical pieces, such as Walter Leigh and Ned Rorem's concertos, to the minimalistic composition of Michael Nyman and Viktor Kalabis' atonal creation. Not many harpsichord players are as multifaceted and expressive as Jory Vinikour when interpreting modern music. So his recording proves to be special and worth hearing. I believe that such a new reincarnation of harpsichord music serves a great purpose to transform the musical landscape for this instrument and to dazzle audiences with this metallic sound that was loved so long ago.

The background image on this page is derived from the 1907 pastel painting Concert of Wanda Landowska in Moscow by Russian post-impressionist painter Leonid Pasternak (1862-1945).