Ukrainian composer, conductor and teacher Myroslav Skoryk was born in what is now Lviv on 13 July 1938 into a musical family.  He spent part of his childhood in Siberia, after his family was deported. Back in Lviv after the death of Stalin, he studied composition and theory at Lviv Conservatory, and then with Dmitri Kabalevsky at the Moscow Conservatory. He was already writing music whilst studying. his dissertation was The Model System of Prokofiev.

During the 1960s he was the leader of a group of composers known as the 'neofolkloric wave'. He taught at Lviv Conservatory (1964-66) and afterwards at Kyiv Conservatory (1966-88) - composition and theory classes focusing on contemporary harmony. In 1983 he wrote the book The Structural Aspects of Chords in 20th Century Music. His composition students included Osvaldas Balakauskas and Ivan Karabyts.  In addition to his own music, he completed works by other composers, including three operas. From 1996-99 he lived and worked in Australia. From 2004 until 2010, with Yevhan Stankovych, he was co-head of the National Union of Composers of Ukraine.  From 2011 he was artistic director of the National Opera of Ukraine. 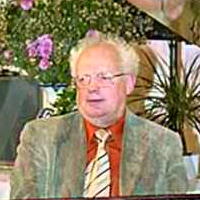 Myroslav Skoryk died in Lviv on 1 June 2020, aged eighty-one, leaving an unusually diverse body of work, including nine violin concertos (dating from between 1969 and 2014), three piano concertos, two cello concertos and a viola concerto.  A glance at some of the titles of his compositions gives some idea of the wide range of influences at play - Vesna (Spring) - Cantata for soloists, choir and symphony orchestra on verses by Taras Shevchenko (1960 - written when he was still a student); In the Carpathians (1959), Variations (1961), Blues (1964), Burlesque (1964) and From the Children's Album (1965) - all for piano; Carpathian Concerto for Large Orchestra (1972); Three Fantasies for 16th Century Lute Tablature transcribed for chamber orchestra (1973); Stone Guest - Music for Theatre Spectacle after Lesyia Ukrainka (1973); Music for Animated Films (1978); Music for the film High Mountain Pass (1978); Three Wedding Songs for voice with Symphonic Orchestra (1978); Fantasy on song themes of Beatles for string orchestra (1993); Paraphrase on themes from Puccini's Madame Butterfly for piano; Spiritual Requiem (1999); Opera Moses on poems by Ivan Franco (2001); Mass (2001); Liturgy (St John Chrysostom) (2005) and Choral settings of Psalms 12, 38 and 53 (2005).

A selection of articles about Myroslav Skoryk

Classical music news - January Newsletter and December Obituaries - Our January 2023 PDF newsletter has just been published, along with a summary of those the classical music world lost in December 2022

CD Spotlight. Passionate Language - Violin Concertos by the late Myroslav Skoryk, heard by Gerald Fenech. 'Andrej Bielow is an enthusiastic advocate of his compatriot's music, and his flowing virtuosity gives these works a glowing attire; also, concern to every phrase and nuance is consistently in focus. Sirenko and his Ukraine ensemble give unbridled support.'