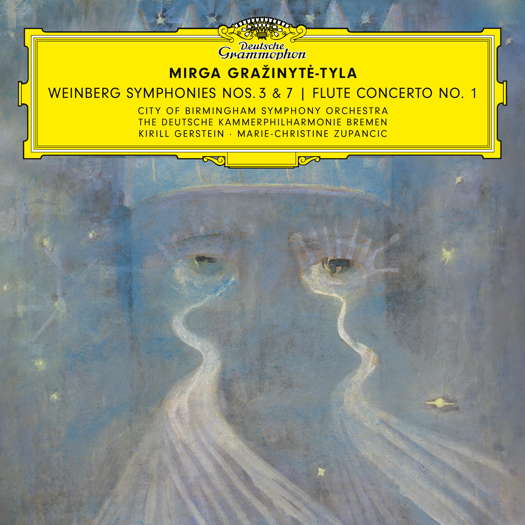 Mirga Gražinytė-Tyla continues her exploration of the music of Mieczysław Weinberg. She launched her Deutsche Grammophon recording career in 2019 with an album devoted to Weinberg's Symphonies Nos 2 and 21, released to tie in with the centenary of this neglected composer. Now she continues her mission to broaden awareness of the Warsaw-born composer's music with Weinberg: Symphonies Nos 3 & 7 and Flute Concerto No 1. She is joined by The Deutsche Kammerphilharmonie Bremen and soloist Kirill Gerstein for Symphony No 7, and by the City of Birmingham Symphony Orchestra for the Flute Concerto – with soloist Marie-Christine Zupancic – and Symphony No 3. The earliest work presented here is the Third Symphony, on which Weinberg began work in 1949. He had settled in Moscow by then, after being displaced by the outbreak of World War II, during which he lost many of his close relatives. By 1949, however, he had already fallen out of favor with the Stalin régime and the symphony's planned premiere was canceled. Having substantially revised the original score, he finally saw it performed in March 1960. A work full of rich contrasts, it incorporates folk tunes from Poland and from Belarus, where Weinberg had studied – whether for purely musical reasons or in an attempt to comply with the official Soviet doctrine of socialist realism – as well as reminiscences of Schubert, Mahler, and Weinberg's friend and champion Shostakovich. Gražinytė-Tyla and the CBSO, with whom she gave her final concert as Music Director in May, presented this work to great acclaim at the BBC Proms in 2019. The composer wrote his Flute Concerto No 1 soon after revising his Third Symphony, and it was premiered by its dedicatee Alexander Korneyev in Moscow in late 1961. Here too we find light and shade, with the rushing, virtuosic writing of the first movement followed by a far more somber, melancholy Largo. The finale is notable for its hints of klezmer music, a style Weinberg would have known from the Jewish weddings at which he played piano in his youth. Gražinytė-Tyla, the CBSO, and soloist Marie-Christine Zupancic – the orchestra's section leader flute – capture every changing nuance of this intriguing concerto. Compared to the considerable forces required for No 3, Weinberg's Symphony No 7 of 1964 is written for harpsichord and strings alone. A modern take on a Baroque concerto grosso, the symphony begins in tranquil style, but its writing becomes increasingly dissonant as its five movements unfurl without a break. Under Gražinytė-Tyla's direction, soloist Kirill Gerstein and The Deutsche Kammerphilharmonie Bremen explore a wide range of sonorities, bringing a searing intensity to the most dramatic moments of this essentially dark work.