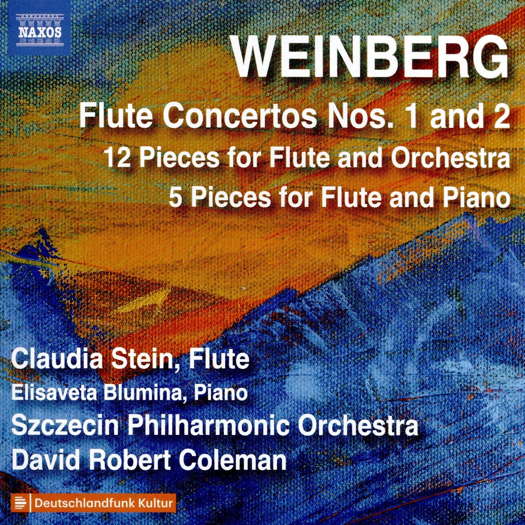 'A compelling disc which should keep the renewed interest in Weinberg's musical legacy on the upward curve.'

Mieczysław Weinberg (1919-1996) was born in Warsaw on 8 December 1919, a year following the end of the First World War. Early in his career he distinguished himself as a very fine pianist who might well have continued his studies in the United States, but the Nazi invasion put an end to all the promise, and he subsequently fled to Minsk under the name of Moisey Vainberg, by which identity he was officially known until 1982. Later he headed to Tashkent where he was heavily involved in several theatrical and operatic ventures. It was there that he composed his First Symphony, a piece highly praised by Shostakovich and which resulted in his settling in Moscow until the end of his life.

Despite several personal setbacks - his father-in-law was murdered in 1948 and the composer himself suffered imprisonment for alleged Jewish subversion, then freed after Stalin's death in 1953 - he steadily gained reputation as an accomplished composer championed by many eminent Soviet musicians of the day. Success lasted till the middle 1970s, after which his fortunes sadly declined very fast to the point that his works were only sporadically performed in the West. Indeed, his death in Moscow on 26 February 1996 went largely unnoticed. It is only in the last decade that his stock is getting the attention it deserves.

Weinberg's output is huge: twenty-six symphonies, seventeen string quartets, seven operas and some two-dozen song cycles plus a wealth of chamber and instrumental music has secured an ever increasing number of performances and recordings. Compared to all this catalogue of works, Weinberg's flute music is extremely lean. Indeed, this CD under review manages to group the whole repertoire for this instrument. All of these pieces were conceived for the flautist Alexander Korneyev, one of the foremost soloists of his day, and the earliest of these are the 12 Pieces from 1947, a series of playful character studies that touch on a variety of moods and emotions.

Also from the same year are the recently rediscovered 5 Pieces which draw on Debussy and the composer's early string quartet Capriccio, Op 11, for its ironic good humour.

The First Flute Concerto (1961) has a lovely genial air with Klezmer influences, while the second, dating from 1987, is one of Weinberg's last works. With its introspective and valedictory mood, this piece vividly reflects the sadness and neglect of his last years.

All is played with style and panache and a committed concern never to make the music sound too eccentric or dissonant, which certainly is not the case. A compelling disc which should keep the renewed interest in Weinberg's musical legacy on the upward curve. Annotations and sound are at the usual high level we have come to expect from this superb label.

The background image on this page is derived from the 1890 painting Góral na tatrzańskiej ścieżce (Mountaineer on the Tatra path) by Polish painter Ludwik Stasiak (1858-1924).