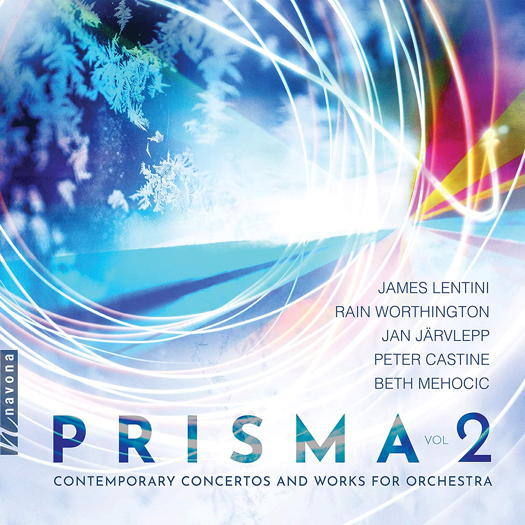 'The performances are committed and enjoyable.'

This album of works of four American composers and one Canadian, contains one concerto, two works for soloist and orchestra and two pieces just for orchestra.

The three movement Concerto for Guitar and String Orchestra by guitarist and composer James Lentini was completed in 1996.

It starts with guitar and strings immediately and is unhurried. It is quite tonal but modulates a lot. The composer shows skill in his scoring, so the sound of the guitar is not swamped by the strings and they both complement each other well. There are some nice episodes where the guitar is playing by itself in a kind of cadenza-like format, and in fact most of the movement tends to be in this vein. At times the music is matter of fact, and at others gently wistful.

The second movement, an adagio, is a kind of meditation, at times tender and in others slightly more tense and almost dramatic. The melodic qualities of the guitar are bought to the fore. The composer writes well for the strings too, and the music is refreshing and never heavy.

The last movement, Allegro, is happy and light spirited. There is a reflected middle section, where the guitar starts off in a more accompanying role to the strings before swapping roles with a carefree extension to the slower melody. There is then a kind of cadenza, before the faster opening theme returns.

Soloist Lliana Matos and the Zagreb Festival Orchestra provide a good account of this uncomplicated music.

I find Rain Worthington's interesting and varied Full Circle for cello soloist and small orchestra the most satisfying work on this disc. It depicts the emotions which emerge and then recede at different times during a person's life. This is certainly not a cello concerto, and lasts about ten minutes. Sometimes the cello takes centre stage, and at other times just emerges from the orchestral texture. At times the interest is melodic and at other times rhythmical or textural, but there is always something here to engage the listener. I am rather partial to this interesting composer, who often deals with the spiritual, and there is a kind of reflectiveness to her music. Some have found this piece somewhat akin to music by Alan Hovhannes, and I tend to agree. The orchestra is the Moravian Philharmonic, and the soloist, the fine cellist Petr Nouzovský, is supported by conductor Petr Vronský.

The one Canadian on the disc, Jan Järvlepp, wrote Camerata Music in 1989, originally for a somewhat unusual collection of eight instruments, and later orchestrated it to produce the version recorded here. Performed by the same orchestra and conductor as on the previous track, it is based, at least in spirit, on the folk music Järvlepp heard from his window in a town in Colombia. Full of joy and rhythmic energy, the percussion instruments play a large part, and at one point some of the musicians clap. This enjoyable work runs for just under eight minutes.

Peter Castine's Aperture for flute and string orchestra (2001) was originally based on the Baroque concerto grosso, but whilst writing, the events unfolding at the World Trade Centre in New York had a deep impact on the composer and this work. Whilst there are strong elements of the concerto grosso and the Baroque, these are seen through the clouds and turmoil of the day, with snatches of conversation and urgency, and shards of brittle emotion. This is a somewhat challenging work to listen to, and a few repeated listenings may be necessary, but the effects are quite profound and memorable. There is an eerily static section, with almost a stunned silence and disbelief for a few seconds, before snatches then start to emerge. The Moravian orchestra is again used, with Stanislav Vavřínek conducting and Beth Hill on flutes. The playing is fine in this rather difficult and taut work.

Lastly, Beth Mehocic's unusual and colourful Left of Winter is performed by the Janáček Philharmonic Orchestra conducted by Jiří Petrdlík. It was originally designed for a dance troupe, and to precede Stravinsky's Rite of Spring. This programmatic work deals with young men about to go off to war, and begins with a grotesque march where the young men are marching to the station. Whilst awaiting the train, they have time to reflect on what life was like before they were called up. A funeral dirge passage depicts the reality that some of them may not return. Eventually the trumpet calls them all to attention and with that, they march onto the train.

Overall this is quite an interesting disc, and some works appeal more than others, but I am pleased once again to be able to hear effective and interesting music which is not part of normal orchestral programming. The performances are committed and enjoyable.

The background image on this page is derived from a pattern created using Gimp.