'At home in Poland, I have a big park full of trees. Trees are my big hobby and in that park, I planted every tree imaginable that will survive in our climate. I often go there, just to be still among the trees and to watch them. What especially fascinates me is how they change with the seasons, colour-wise and also in terms of the sound that the wind makes when it blows through their branches. There is a different sound to the wind blowing through a tree in autumn than in summer, when the leaves are lush and abundant.' - Krzysztof Penderecki, talking to Tess Crebbin in 2004 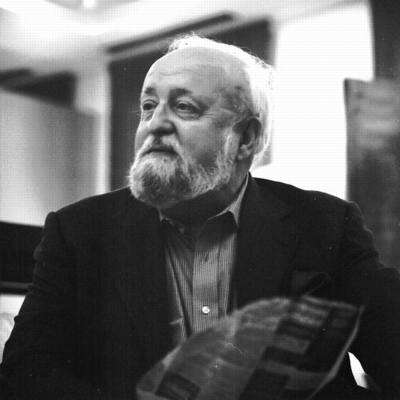 Polish composer and conductor Krzysztof Penderecki was born in Dębica on 23 November 1933. He studied music in Kraków, at the Jagiellonian University and at the Academy of Music, where he then began teaching.

His Threnody to the Victims of Hiroshima and St Luke Passion are known internationally.

His early works were based on tone clusters, but his style changed in the mid-1970s, using simpler constructions, with Penderecki commenting that he 'was saved from the avant-garde snare of formalism by a return to tradition'. Important works from this period were the Lacrimosa, which he expanded into his Polish Requiem, and his Credo.

Penderecki died on 29 March 2020, aged eighty-six, at his home in Lusławice, east of Kraków, following a long and serious illness.

A selection of articles about Krzysztof Penderecki

CD Spotlight. Approachable Music - The complete violin and piano music of Lutosławski and Penderecki, strongly recommended by Geoff Pearce. 'The performances by violinist Michael Foyle and pianist Maksim Štšura are responsive, intelligent and very polished and I, for one, found this disc a delight.'