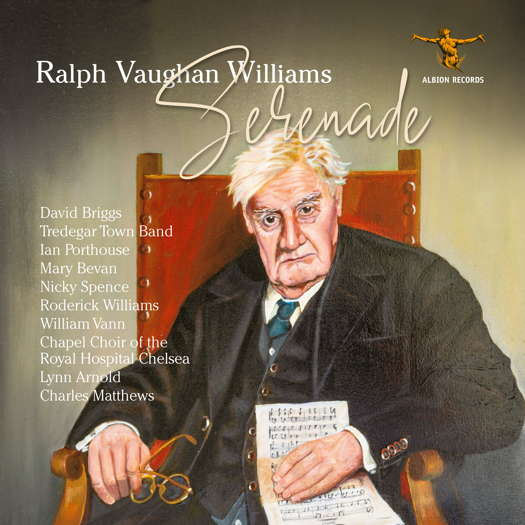 4 The Winter's Gone and Past

5 I will give my Love an Apple

7 For All the Saints and improvisation

9 March Past of The Kitchen Utensils (The Wasps)

19 God be With You Till We Meet Again (Randolph)

'Serenade is Albion's eighth and final release in this calendar year, so it is appropriate that it is released on Ralph Vaughan Williams' 150th birthday, Wednesday 12 October 2022. Of course CDs are only ever released on a Friday, so it is officially available from Friday the 14th – but participating retailers will be offering it for sale two days early in the spirit of the anniversary. Slightly tongue in cheek, I suggested in the booklet that it is a party album for this special birthday. If so, it is the sort of party that Vaughan Williams would have enjoyed – with five world premiere recordings and a number of transcriptions made especially for the album. We have re-used a few tracks in order to link disparate sound worlds together, but 80% of the total playing time is represented by new recordings. At the heart of the album is David Briggs' dreamy organ transcription of Serenade to Music, played at Truro Cathedral. It was held back from our recent Transcriptions from Truro recording because there was insufficient space for it. David also gives us The March Past of the Kitchen Utensils from The Wasps – now that really is a party piece – and what the French would call a sortie based on Sine Nomine. The premiere recordings comprise a Flourish for Three Trumpets and no less than four unpublished 'Cambridge' Flourishes for Four Trumpets, played by members of the Tredegar Band, who also give us a brass band arrangement of Two Herefordshire Carols, as harmonised by Vaughan Williams, under their conductor, Ian Porthouse. There are three folk songs – new recordings for this album, made at the same time as the four albums of our complete Folk Songs series, each of the three soloists singing a folk song previously recorded by one of the others. Lynn Arnold and Charles Matthews reprise the early Suite for Four Hands on One Pianoforte, with the original version of the Minuet. Charles Matthews goes on to play organ arrangements of three works by Vaughan Williams. We conclude with a hymn tune that Vaughan Williams named after his cousin and best man, Ralph Wedgwood, known to his friends as Randolph – set to words that Vaughan Williams salvaged from a Moody and Sankey hymn: God be with you till we meet again. This is a quiet end to a well-behaved party, looking forward to another 150 years of great music.' - John Francis