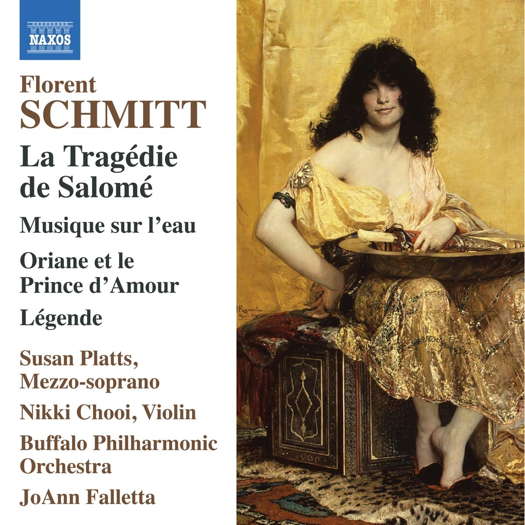 'The orchestra and soloists are very fine, and the atmospheric nature of the music is beautifully captured.'

I was first drawn to the music of Florent Schmitt (1870-1958) as a boy when I first heard his Suite en Rocaille for flute, violin, viola, 'cello and harp, a charming work. He was a composer with a wide range of interests and a large circle of friends, and earlier in the twentieth century his music was quite popular, but interest had begun to decline by the time of his death.

I was very pleased to come across this disc which includes one of the composer's most important works - some regard it as his masterpiece - La Tragédie de Salomé. The composer originally wrote this work in 1907 as a ballet and it used a chamber orchestra. Schmitt revisited this work, reducing the content to about half its original length and rescoring it for large orchestra.

The work is in two parts. The first part is a prelude followed by a dance as the sun rises over the Dead Sea. This music is calm and beautifully impressionistic and flute and cor anglais, along with muted strings, play a prominent role in the prelude. The mood is calm, but there is an underlying passion that increases in power as the movement progresses and the music opens out gloriously, like the rising sun, before subsiding again with a return of the cor anglais. This is followed by a more lively, charming dance and one can imagine the joyous dance of a young girl which rises in passion as the dance progresses. One can certainly hear the influence of Ravel (who was a close friend), but here is an individualistic voice.

The second part starts with a slow lament, progresses to a chorale where Salomé is tomented by visions of John The Baptist, and this leads to a scene of a violent storm, followed by two dances. The music is very atmospheric and somewhat veiled in parts but from time to time bursting out with climaxes. This work reminds me somewhat of Loeffler's A Pagan Poem. The final minute or so is tragic and riveting.

The next work, Musique sur l'eau (1898), is a settings of a poem by the French symbolist poet, Albert Samain. This work is exquisite and well worth a listen for its ravishing beauty. The orchestra responds beautifully, as is does throughout this disc, and the voice of Susan Platts is sumptuous, powerful when called upon, delicate and melting at other moments. I would love to hear her sing other gems from the period, such as those of Duparc.

A later work, Oriane et le Prince d'Amour (1934-1937), was written for a two-act ballet by Ida Rubenstein. Here, the prince rescues his beloved, Oriane, from a dungeon where she has been placed by an evil sorcerer. The music, forever shifting, moves between lush harmonies and calm music, music of passion, to more dissonant music of drama and conflict.

The last work is Légende (1918), originally conceived for alto saxophone, but Schmitt also made transcriptions for violin or viola. The work starts calmly and goes though a wide range of moods and tempi as the work progresses. The source or content of the legend is not revealed by the composer, and one can certainly hear the influence of Debussy in this work. Nikki Chooi is an expressive and fine performer of this work, and his violin soars over the instrumental texture in an ecstatic way. This is a premiere recording of this work, as is Musique sur l'eau.

This is a disc of largely unfamiliar music, to most of us, that I would heartily recommend. The orchestra and soloists are very fine, and the atmospheric nature of the music is beautifully captured. This is not a disc that will disappoint.

The background image on this page has been derived from a circa 1910 group photo taken at Florent Schmitt's house in Saint-Cloud, Paris, featuring Maurice Ravel, with a long beard, facing right, and Florent Schmitt, immediately below Ravel, facing the camera, with his face leaning left.