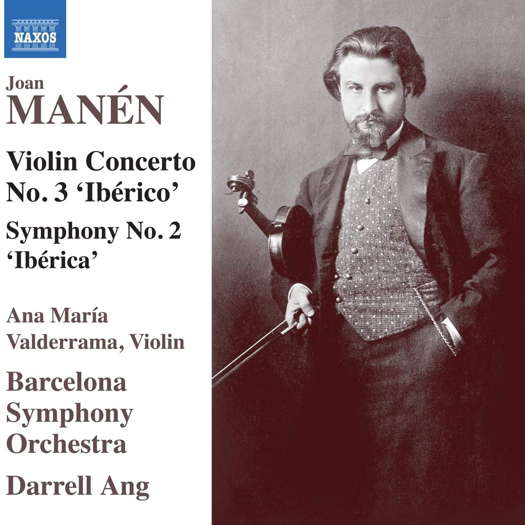 'Ana María Valderrama's rendition of the Concerto is technically superb, and there's a purity in her tone that you don't experience every day. Darrell Ang gives sympathetic support throughout.'

One of these is Joan Manén (1883-1971), who during his lifetime was nearly as famous as Pablo Casals, but whose music, after his demise, quickly fell into neglect. Manén was born in Barcelona on 14 March 1883, and when only three he started learning theory, solfege and piano with his father. At the age of five he started to receive violin lessons with several local fiddlers, but their efforts proved fruitless, as Manén adored the piano and it was the only instrument he wanted to excel in. Still, he eventually mastered the violin as well, and when he was seven he made his debut in Castellon, performing on both instruments.

By a strange twist of fate, Manén ended up being one of the great violin virtuosi of his time, and he can be specially proud of having made the first ever recording of the Beethoven concerto. He had a very full life, giving more than four thousand concerts or recitals, and travelled around the world five times, visiting, among other countries, Argentina, the USA, France, Poland, Germany, Austria and Portugal. During the First World War, Manén lost all his savings and to recoup his finances he embarked on an extensive tour of South and Central America, followed by a four-year stay (1921-25) in the States.

He was prolific on all fronts and wrote in all accepted genres. To his credit, he composed seven operas, two ballets, nine orchestral works - two of them symphonies - and numerous other works for soloist and orchestra, including three concertos, a concertino and five other pieces for violin as well as chamber, instrumental, vocal and choral works. He made many arrangements and transcriptions, and produced a number of books. He also contributed to several journals and founded the review 'Musica'.

The Violin Concerto No 3 (Iberico) was composed in 1940, and though it dates from those dark times, the piece is an overtly romantic work, brilliantly written and full of Iberian vitality that raises the pulse more than a notch.

The Second Symphony was written in Barcelona in 1954-58: the manuscript is dated 18 December 1955, but most probably the piece underwent several revisions. Scored for a very large orchestra and subtitled 'Iberica', the work alternates between the pastoral and the solemn encapsulated within a Spanish-flavoured structure.

Ana María Valderrama's rendition of the Concerto is technically superb, and there's a purity in her tone that you don't experience every day.

Darrell Ang gives sympathetic support throughout. As to the symphony, Ang's reading is full of enthusiasm for the piece, and he certainly makes a strong case for the passionately colourful orchestration, which is the hallmark of much of the music of this period to come out from Spain.

Sound and notes are just splendid.

The background image on this page has been derived from the 1901 oil-on-canvas painting Platja de Pequín (Pequín Beach, Barcelona) by Catalan artist Isidre Nonell (1872-1911).