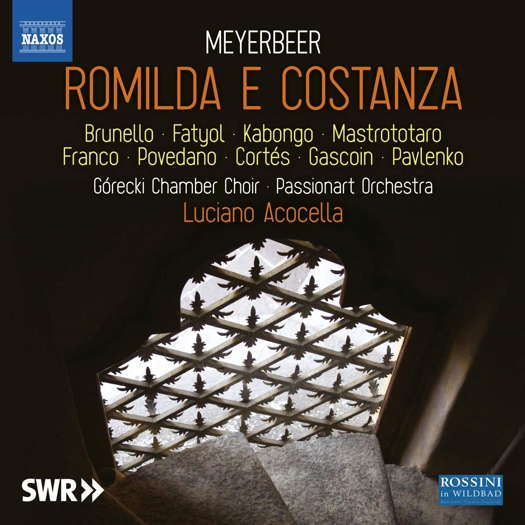 '... a rescue opera which is worth saving from oblivion.'

This CD marks a double rescue: the rescue of a virtually unknown opera by Giacomo Meyerbeer - the name he chose for himself, even though he was a Berliner and spent most of his artistic life in Paris. I believe that the Bad Wildbad performances of Romilda e Costanza formed the first production in modern times of this opera. They were part of the Rossini in Bad Wildbad annual festival. The CD was recorded 17-28 July 2019; it is a live recording and the listeners can hear the applause and accolades after the main numbers.

How does Meyerbeer fit into a Rossini Festival? This opera does fit very well. It was composed during Meyerbeer's often forgotten Italian period (1815-1826) when Gioacchino Rossini was the king of the Italian theatres and most composers were trying to imitate his style and especially his innovations.

Meyerbeer was an extremely wealthy twenty-six-year-old composer at the time of the successful premiere of the opera Romilda e Costanza at the Teatro Nuovo in Padua on 19 July 1817. He was hardly known but money makes wonders. He had one of the best and most popular librettists on the market, Gaetano Rossi, and a long plot about succession intrigues at the court of Provence. Basically. the plot is a rescue story with a love triangle. However, the love triangle is not the standard affair between a soprano and tenor, with the baritone attempting to attract and conquer the woman. Here there are a soprano and mezzo or alto both in love with the tenor. They are rivals but join forces to free him from the jail where his enemy locked him up and attempts to have him slaughtered. As the opera is for an Italian audience and the score lasts three hours for a total performance of about four hours, including set changes and an intermission, there are moments of relief in an otherwise quite gloomy plot (until the final rescue and, thus, a happy ending). It is labelled 'a semi-serious melodrama', after all!

As rightly pointed out in the CD booklet, the breakthrough in Meyerbeer's career came when he encountered Rossini's operas. He immediately recognised Rossini's genius, later calling him the 'Jupiter of music'. In his first Italian opera, Rossini's innovations offered him the pointers he had been looking for on how to develop a style of his own that would realign older operatic traditions, both Italian and French. Rossini had already taken this approach, and now he became, for Meyerbeer, the latest link in this chain of transmission.

The CD booklet documents the genesis of Romilda e Costanza quite well as well as the similarities and difference with Beethoven's Fidelio which had its debut in 1814 when Meyerbeer was in Vienna and most likely attended one of the performances. The dramatic scheme is easily recognisable in Romilda e Costanza, but with one important difference: here it is two women who are fighting to free the imprisoned Teobaldo – the current lover, Romilda (living incognito as the page Adelio), and the woman he used to love, Costanza. The rescue plot is intertwined with a love triangle between a man and two women who experience themselves as rivals and at the same time as women who share a common love for the same man. The two women and their passions are at the centre of the action. And the man they both love, Teobaldo? As a man caught between two women, he is an example of the 'vacillating hero' role type. Although Teobaldo only ever loves one of them, Romilda. The two women's love for him represents a common reference point for their feelings.

The Bad Wilbad Festival is not a major operation like Pesaro's Rossini Opera Festival (ROF). It works with young singers; some of them, however, reach, in a few years, ROF, Glyndebourne and major opera houses. The Passionart Orchestra of Krakow is a good ensemble that works in Poland with well-known conductors; in Romilda e Costanza, their conductor is Luciano Acocella, a comparatively young Italian who had worked extensively in Europe, North America and Asia in the last ten years. The chorus is the agile and fresh Górecki Chamber Choir, a Polish ensemble too, originally started for Church music but now a frequent guest of the Bad Wildbad Festival. A good essay of the brisk orchestra as well as of the good quality of the chorus is in the introduction to the opera.

Let's focus on the three principals because the vocal parts are the most difficult in this type of opera. And vocalizing was the cookie the audience of 1817 valued most.

The tenor (as Teobaldo) is Patrick Kabongo, born in the Congo Democratic Republic and trained in Brussels, Paris and Florence. He demonstrates that he is an excellent coloratura tenor with a clear timbre, a high texture and easy to reach high Cs and top range. This is clear from his long and impervious entry aria (cavatina) with chorus.

He may become a rival or a successor to Juan Diego Flórez.

The soprano (as Costanza) is Luiza Fattyol, born and trained in Romania as well as in Germany, where she is a member of the Deutsche Oper Berlin, where in the 2019-20 season she made her debut in the lead role of La bohème. Her entry aria - CD1 track 6 - and second act tragic aria - CD2 track 12 - give a good idea of her abilities as a lyric soprano.

The third protagonist (as Romilda) is the Italian mezzo-alto Chiara Brunello, who is already an accomplished opera and concert singer. She does not have an entry aria. Romilda rushes into the hall in a state of excitement – happy at having found her lover and unhappy at seeing another woman by his side. The full depth of her passionate, impulsive nature is already revealed in the accompanied recitative. There is no room for an aria. Romilda does begin one - CD1 track 14 - but it immediately opens out into an ensemble, expressing the bizarre triangular situation - CD1 track 16. She has to wait until almost the end of the opera for her only true aria - CD3 track 16 - but then she is richly rewarded with a real corker of a virtuosic number that also comes at a key point in the drama. Brunello shows her talent for virtuoso singing.

As in Rossini's opera, there are several very skilful soprano/alto duets - CD2 tracks 15, 16, 17 and 18 - as well as excellent ensembles where the whole company sing.

In short, this is a rescue opera which is worth saving from oblivion.

The background image on this page is derived from an 1831 lithograph of a performance of 'The Ballet of the Nuns' from another Meyerbeer opera, Robert le Diable, by French artist Jules Arnout (1814-1868).