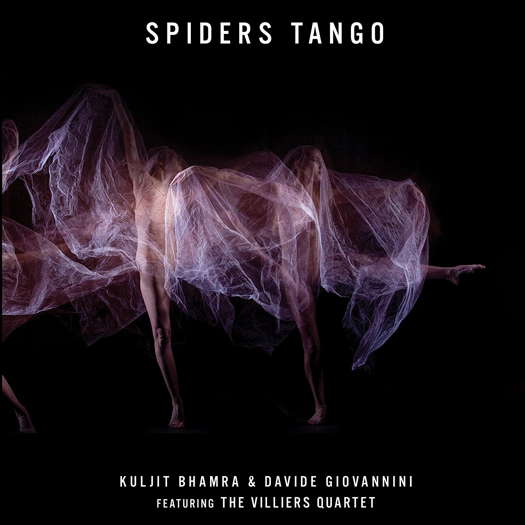 '... always colorful, never boring, even though at times overflowing with impressions.'

This album grabs you by your toes, igniting the heart with sudden and unpredictable drumming, swinging you off your feet with intangible string melodies and confusing all together with the additional layer of tabla sound. The aim to create a new tango sound in any way cannot be called boring or usual. It comes as no surprise as this unpredictable sound was being born out of an extravagant collaboration of three very different and individualistic UK-based musicians: virtuoso tabla and percussion player Kuljit Bhamra, known for fusing bhangra dance beats and Hindi film tunes into British and Asian jazz/pop; drummer-percussionist and vocalist Davide Giovannini; and the classical string Quartet-in-Residence at the Jacqueline Du Pré Music Building at Oxford University - The Villiers Quartet. Kuljit Bhamra and Davide Giovannini have already collaborated and recorded a similarly spirited CD Bhangra Latina ten years ago, as another meeting point of Indian and South American musical traditions. Bhangra tradition throughout these years has developed into a largely beat-based music genre by British Punjabis.

Their newest recording, named Spiders Tango, once more feels like a long, ever-changing and fast-paced journey throughout eccentric, captivating and never before experienced music soundscapes that takes you from the eastern landscape throughout the road to freedom, passing lost temples, wistful horizons, rivers and even glimpsing into the cave of doubt - everything in a dance step, followed by Indian drum and Argentinian tango footsteps.

The medley of different traditions, inspirations, cultures, harmonies and rhythms on this CD feels like a birthplace of a completely new genre. Since it is a meeting point of two virtuoso percussionists of different traditions - the unique multi-tabla set of Kuljit Bhamra and the melodic drumming of Davide Giovannini - the distinctive rhythm converts this CD into a perpetuum mobile, and its ever-changing rich music material creates a sense of urgency and elevates energy that doesn't allow the listener to stop for a rest or for contemplation throughout the experience of listening to this recording. Also, the drums themselves are more melodic than one would expect. According to the musicians themselves, they explored working with drums in a melodic way and therefore tuned the drums to match the notes of the tabla. This allowed them to make changes in scales and have a melody carried by the drums.

On top of this melodic motor, a harmonic movement of the Villiers Quartet's strings comes from the classical western musical tradition and in this way completes the sound of the CD, forming percussion-led grooves and poly-rhythms. The experience finalizes as not a food for thought, nor an empty space for the inner meditation. The sound of this CD is being felt throughout the entire body, touching the heart, shaking arms and legs, making the listener immerse into it fully and sensually.

This helps the recording to evolve into an entirely new and culturally independent sound world, filled as much with energy, as well as emotion. The imagery of the world is being advanced by the vivid soundscape-like names of the tracks and somewhat programmatic narration of the entire disc. The visual and cultivating one's imagination tracks, such as eastern landscape, road to freedom, cave of doubt, river journey and wistful horizons are a direct association with a certain soundscape as a mental, emotional and physical place, depicted with the rich sounds of music.

Other names - such as Spiders Tango and Surreal Dancers directly allude to the dance as a hidden purpose of this disc coming alive in the listeners' hearts as they listen. In these pieces one can hear musical elements borrowed from different cultures around the world - far eastern harmonies in Eastern Landscape, world music elements in the Road to Freedom, Argentinian tango intonations in Spiders Tango, gongs in the Cave of Doubt, and western drumming in Rebirth and Renewal.

All this rich diverse mix produces a music experience that excites the imagination with its unusual, immersive, sensual, visual experience. Sometimes one wonders whether this tick substance of musical material from different cultural backgrounds really stylistically meshes well together.

All the different colors together all the time at moments clashes as feels tacky. This recording is definitely not following the 'less is more' rule here. As a result, its musical experience is always colorful, never boring, even though at times overflowing with impressions.

The background image on this page has been derived from a design by British painter, book illustrator, interior decorator and travel writer Estella Canziani (1887-1964) from The Bookplate Annual for 1921.