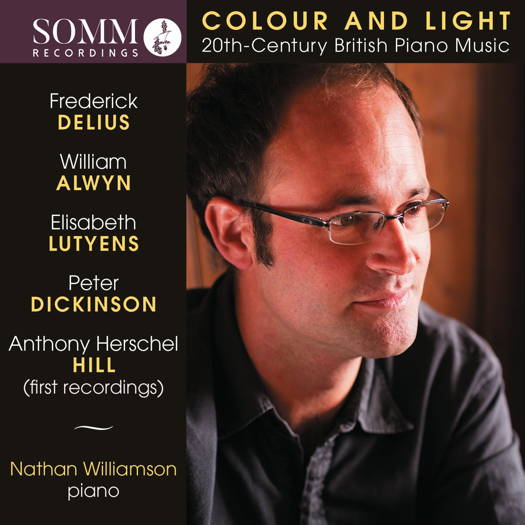 '... brought to light with the utmost conviction.'

British music during the last 150 years is wonderfully varied and often innovative, displaying an enormous range of ideas, forms and styles. Still, one very important question looms over all this musical endeavour, namely: What are the composers' stances with regard to the traditional and the progressive? It is this particular predicament that this CD is trying to address.

Following his debut recording Great American Sonatas for SOMM which garnered some raving reviews, pianist Nathan Williamson turns his attention to the British piano repertoire of the twentieth century - a revealing exploration of how the past influences the present and the new. A century-spanning programme, from Delius' quixotic Nocturne of 1887, here transcribed by Robert Threlfall in 1986, to Anthony Herschel Hill's fiery Toccata of 1985, plus works by three other distinctive but highly contrasted composers.

Elizabeth Lutyens' The Ring of Bone (1975) has modernity written all over it. Indeed, it daringly employs the use of spoken text in what Williamson describes in his booklet notes as 'a bold and heartfelt gesture'.

William Alwyn's Twelve Preludes of 1958 pay a glancing look to Lutyens' serialist techniques even while showcasing 'a peculiarly English combination of both tonality and modality' uniquely his own.

Peter Dickinson's post modern, poly-stylistic Paraphrase II (1967) is the work of a composer ready to embrace the broadest influences, its seven sections imaginatively reworking an earlier three-part motet. This is the first studio recording of the piece.

Slowly emerging towards the light are Anthony Herschel Hill's Litany (1992) and Toccata (1985). These two pieces are the results of a wholly individual compositional voice boasting some of the most gorgeously idiomatic and exhilarating piano writing of any late twentieth century composer. Both works are also first recordings.

The programme also includes Frederick Delius' Duet and Prelude from his one-act opera Margot la Rouge, composed in 1902 yet unperformed until 1983. Distinctive for their delicate harmonic textures and colours, and masterfully transcribed by Ravel, these two short works are indeed one of the composer's finest creations. Pity the opera is still languishing in almost total neglect.

This music is certainly no run-of-the-mill piano repertoire, but in Nathan Williamson's hands, with his great attention to detail and exquisite yet incisive touch, all the hidden secrets are brought to light with the utmost conviction. A stimulating essay and some top-class sound complete an issue worthy of serious investigation.

The background image on this page is Blurred orange, yellow, red and green circles on brown generated by Keith Bramich using Graphic Converter.