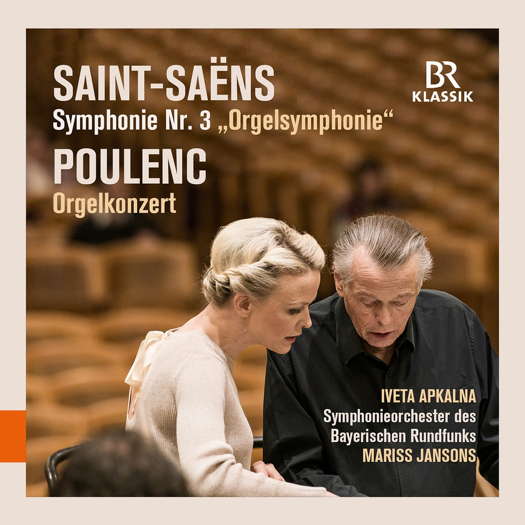 Music for organ and orchestra
by Saint-Saëns and Poulenc,
recommended by GERALD FENECH

Saint-Saëns was a household name in his time, and during his long career he composed more than three hundred works across all genres, but his organ compositions are comparatively few. A real pity this, as he was considered to be one of the finest organ improvisors of his age; indeed, Liszt was full of praise for his ability to transcribe two of the former's works from piano to organ.

Saint-Saëns' admiration for the great virtuoso was also great, and when Liszt died on 31 July 1886, Saint-Saëns dedicated his Organ Symphony (No 3) to the master just departed. This spectacular work was in fact Saint-Saëns' fifth effort in the genre, but since the first two are not numbered, the Organ Symphony is considered as the Third. Composed between 1885/86, this unconventional piece does not use the organ concertante but treats it as part of the orchestra. Also, the work is subdivided in two movements, but the traditional four-movement structure is maintained.

Considered a milestone in French symphonic history, the symphony was a great hit, even up to our times, and this success led the composer to remark: 'Here I gave everything I was able to give. What I have accomplished I will never achieve again.' He was indeed right, as this work has everything; masterly orchestration, colour, warmth, immense excitement and, above all, a dynamic vitality rarely found in French symphonic music. Saint-Saëns was obsessed with 'perfect clarity' and in this symphony he poured all his genius to create music that is striking for its tranquillity, soothing harmonies, soft modulations and flowing style.

Born in Paris in 1899, Francis Poulenc was already a teenager when he joined the group known as 'Les Six' founded in 1918 by Erik Satie and Jean Cocteau. Both men stood for radical simplicity and this left its mark on the young Poulenc. The composer never attended a conservatory, but teachers such as Charles Koechlin for composition and Ricardo Vines for piano helped him nurture his musical talents. Poulenc also fell under the spell of Chabrier, Ravel and Stravinsky.

Poulenc's life was a turbulent one. In 1946 he fathered an illegitimate child, and later in life, his homosexual inclinations turned him into a social outsider. He suffered from depression all his life, but a pilgrimage to the Rocamadour site and tragic events among his circle of friends, renewed his interest in Catholicism. When he died in 1963 his works were nearly forgotten, and it was only in 1999, the centenary of his birth, that people began to take an interest in his wide-ranging oeuvre.

One of Poulenc's most concise works is his Organ Concerto completed in 1938 after a veritable struggle that pained him a lot. The work juxtaposes sounds reminiscent of the interior of a church with the boisterous mood of a fairground.

Poulenc cleverly combines the two worlds in an extended twenty-minute fantasy. Towards the middle, this multipart work builds up into a dramatic section with powerful organ passages, framed on either side by two long and calm sections that resemble meditations on Paris by night. Indeed, this Concerto is, to all intents and purposes, a magical sound collage of Paris in all its fascinating allure.

The private premiere took place on 16 December 1938 at the Paris estate of the Princesse de Polignac, and luckily, Poulenc managed to get two of the best performers to launch this extraordinary concerto: organist Maurice Duruflé and conductor Nadia Boulanger. The late Mariss Jansons and his German Ensemble give energetic performances full of articulate playing that elicits great excitement; the finale to the Symphony is a case in point.

The Concerto is also wonderfully performed by Iveta Apkalna; indeed, at times her ardour for the piece matches Jansons' devotion to the Symphony.

A hugely enjoyable album, well worth hearing, even if you have, as I presume, another version of the Saint-Saëns piece. Sound and notes are first-rate.

The background image on this page is derived from a photograph of a sunset in Worcestershire on 14 August 2018 by Keith Bramich.