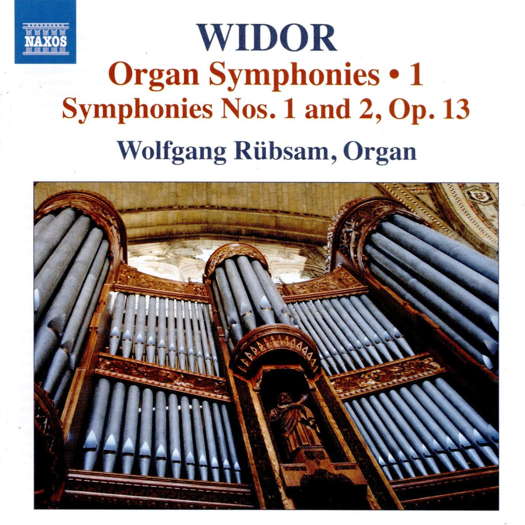 '... a fascinating series of contrasts within a framework of spectacular effects.'

Charles-Marie Widor (1844-1937), one of the towering figures in French music during the nineteenth and twentieth centuries, can also be regarded as one of the most unfortunate. Hugely influential and highly esteemed in his time, and a master composer in practically all genres, he is today just associated with the organ. To add insult to injury, Widor's extensive oeuvre for the instrument barely makes an appearance in the concert hall. All that one can hope to get are a handful of movements from his ten symphonies for organ, the mainstay of his wide repertoire in the genre. Critics cite two main reasons for this neglect: one, this music needs several hearings until one can get to the real gist of Widor's musical expression; and two, many of the movements are very difficult to play, testament to the creative and technical mastery that the composer retained even in old age.

These symphonies went through some unrecognizable transformations over his eminently long career. After the 'Classical' flavour of Op 13, Widor's voyage proceeded through the virtuosic monumentality of the developments in Op 42, and he finally arrived at the two final works, the 'Gothique' Op 70 and the 'Romane' Op 73, both influenced by Gregorian chant and suffused with an air of spirituality. These works help immensely to comprehend Widor's aphorism: 'To play the organ is to manifest a purpose that has been filled with the gaze of eternity at first hand'.

This first volume in this new Naxos cycle includes the first two symphonies. The Op 13 No 1 is a homage to Bach, luminous, ceremonial and punctuated with virtuoso flourishes.

The Op 13 No 2 offers a fascinating series of contrasts within a framework of spectacular effects. These are works that have the power to capture one's attention uninterruptedly, and strongly attest to Widor's unique ability in developing a genuine symphonic approach to organ music, finding new avenues to create combinations of colour, sonority and texture.

The renowned organist Wolfgang Rübsam, who already has over one hundred recordings to his credit, playing on the magnificently restored E M Skinner organ at Rockefeller Memorial Chapel, The University of Chicago, launches this exciting cycle on an irrepressible note. Indeed, his renditions are full of rhythmic vitality, exhilarating, and sounding as if this is high risk musicality, but Rübsam brings off his ordeal without a hitch.

The background image on this page is derived from a February 1924 photo of Charles-Marie Widor at the organ.