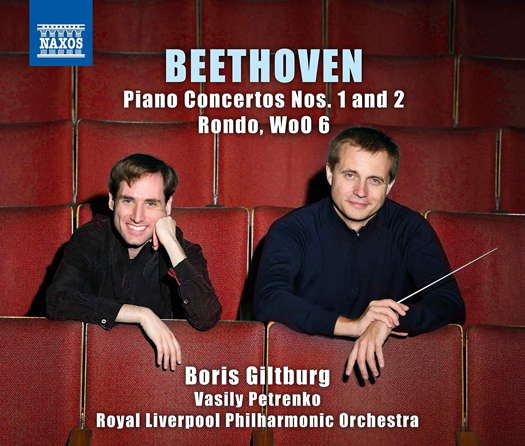 '... the orchestra and the piano are often interwoven in their lines, and the conversational phrases built up a tension that is perfectly managed by Giltburg.'

Beethoven's reputation as being the first true Romantic composer, or at least the bridge between Classicism and its predecessor, has never been sufficiently tainted. His early works show the distinct effect of Mozart and his teaching by Haydn, but also display the largesse and splendour that would characterize his more groundbreaking and life-affirming later works.

That is of course not to say that there are two Beethovens; one of early preciousness and distinctly classical style in the first, and the more sumptuous later works in another. There are both classical and Romantic elements in his earlier works, and the touch of personal brilliance that would become more evident in later pieces.

This recording by the Royal Liverpool Philharmonic Orchestra, under the direction of Vasily Petrenko, showcases Beethoven's early piano works that display both sides of the composer in the very late eighteenth and early nineteenth centuries. The first two concertos on offer are performed with exquisite precision, if not with the musical virtuosity that can transform the score into an intellectual phenomenon in its own right. Boris Giltburg is the pianist, and his technical skill is in no doubt, taking every note, chord and phrase to a new degree, and expressing a mixture of playfulness and tenderness that is welcome in the breezily optimistic first concerto from 1795-1800. The first is a deeply Mozartian creation, and it is important to remember that it was only in the previous few decades that the piano concerto had become such a popular art form in itself, after Mozart's twenty-three achievements.

The First, in the confident C major, has all of the Mozartian features in the beginning; with a strong introduction followed by the piano. Despite a rather tentative string opening, the introduction of the rest of the orchestra adds a new vigour that makes the piece distinctively Beethovian.

The third movement is a particularly joyful section, with Beethoven not putting in much in the way of a minor B section, following the beauty of the second.

The Second, despite being written earlier than the first, is more distinctively Romantic and expressive. The swift shifts between minor and major, doubt and serenity, will be echoed in the music of Schubert in the decades to follow. In the first movement the orchestra and the piano are often interwoven in their lines, and the conversational phrases built up a tension that is perfectly managed by Giltburg. The Orchestra's string playing is expertly managed, although even though it is but the second player in a concerto, overall a vigour and instinct of inspiration is missing from the ensemble as a whole, despite the perfect voice as an accompanying sound.

The Allegro con brio of the first movement of the second alternates between the virtuosic and restrained before a quick end with a perfect cadence. The second movement is much more doubtful and Romantic, full of Beethoven's remarkable long phrases and longing for an eventual resolve. There is always the tendency to draw in Beethoven's often desperate personal situations and find deep connections with them in is music. It is not a flawed idea - after his sight deteriorated he created such emotionally charged works as the Eroica Symphony, but the Second Symphony, just as magnificent in some ways, does not show many signs of a broken man pouring his soul out in music. Beethoven had to deal with many difficulties throughout his musical career: personal, professional, and political, yet managed, to an almost superhuman degree seen in very few that have ever composed, to capture both the musical spirit of his age and that of audiences after it.

The Adagio second movement is perhaps the most serene and delicate of the whole disc, showing the early contrast in Beethoven's work between the solemn, virtuosic, and emotionally charged. This is showed in the plaintive ending of the second movement and the joyful start of the third, which gives the effect of Mozart's Twenty-Third in which the mournful second movement is instantly changed into the effervescent A major.

The Rondo that ends the recording was originally intended to be the ending of the Second, but seems slightly like an extra indulgence of that piece, and is now a piece in its own right. It once again displays the playful mood of the music and the interaction between the orchestra and the pianist at the forefront. This is played superbly by a Giltburg who shows an obvious connection with the music and its heritage in his sleeve notes, describing the Rondo as 'a lovely standalone piece, fun and carefree'. It is certainly all of these, but is also an almost perfect example of Beethoven's classical influences and his own style in his early composing period. It is a fitting end to a disc of some works that show off the early Beethoven in his eloquent, energetic style, created with such a sumptuous piano playing technique.

Recent musical writers have talked of Beethoven's reputation among his friends as not simply perhaps the greatest composer to have ever lived (as if ever that could be resolved), but as the greatest person to have been. His sometimes tempestuous character and his eventual deafness never stopped him being a kind and often joyful personality, and his ability to continue music-making, and making the pieces upon which his reputation has mostly stood whilst having such an impediment, is one of the miracles not just of classical music, but of Western culture as a whole.

The background image on this page is a design created from music notation for the opening theme of Beethoven's Piano Concerto No 2.