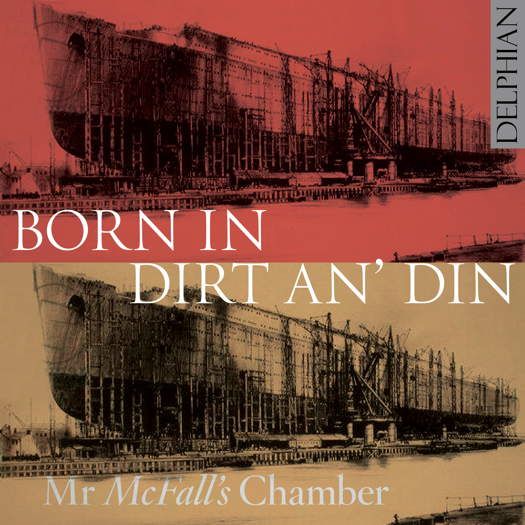 Jewel in the Scottish Musical Crown

Mr McFall's Chamber is the astonishingly versatile chamber group that evokes strong belief in the music that they play. Their approach to programming is innovative and adventurous, promoting music of many hues, styles, and eras, combining contemporary classical pieces with jazz, folk, progressive rock, cabaret, and tango. Mr McFall's Chamber have taken such a bohemian approach back into the concert halls. The ensemble consists of a string quartet: violins Cyril Garac and Robert McFall, viola Brian Schiele, and cello Su-a Lee, with additional double bass and bass guitar player Rick Standley, piano, keyboards and electronics player Paul Harrison, and drummer Stuart Brown.

Since it was formed in 1996, the group's aim has been to create new audiences, new music and new directions in music combined with a pursuit of excellence in performance and a desire to make the concert-going experience as enjoyable as possible. Therefore this ensemble is often called the most important development on the Scottish music scene and is described as 'the jewel in the Scottish musical crown'.

Their newest CD, Born in Dirt an' Din, was released at the end of last summer. The title track was inspired by a 1961 poem describing shipyards on the Clyde, where 'a ship is born in dirt an' din', but the 'lumps o' girder-cradled steel' are beautiful and imposing. It is another vibrant direction, combining edgy post-industrial synth textures with ominous electronic percussive grooves. For this recording, Mr McFall's Chamber is expanded to a undecet with Maximiliano Martin (clarinet), Alec Frank-Gemmill (horn in F), Iain Sandilands (percussion) and Tom Hunter (percussion). The CD consists of pieces by five contemporary composers with backgrounds in jazz: Tim Garland, Paul Harrison, Martin Kershaw, Mike Kearney and Raymond Scott.

Tim Garland (born 1966) is a world-class jazz improviser and an imaginative British contemporary composer. His composition ExtraPollination begins the CD. It is an evocative four-movement suite, rooted in the present day. The inspiration that the composer drew for this piece comes from his life experiences: traveling on the London Underground, visiting Bell Rock lighthouse and hearing the sound of flamenco guitar. Therefore, in this piece, the composer groups different musical and experiential elements in an organically unified way, creating a unique musical atmosphere. The virtuosic solo part of clarinetist Maximiliano Martin builds block chords with the strings that evolve into an exciting climax, ending the piece quietly but restlessly.

Jazz pianist, organist, composer and arranger Paul Harrison (born 1975) is the author of the second and title piece, Born in Dirt an'Din. Inspired by the poem Red Poppy. In the sound of this composition the past is presented through a futuristic post-industrial lens. It was structured as cacophony. A double dose of electronics from Harrison's synthesizer and the drum kit helped to set up a mechanical sound with bangs and whizzes. Relief from the driving energy comes from a lyrical cello duet with double bass. Harrison's other composition, Consequences, demonstrates the exploration of combined jazz and classical music elements. It blends electronics and percussion to pleasing effect, an engaging depiction of busy industry.

The other two compositions, Closing In and Far Vistas are by British alto saxophonist, jazz composer and producer Martin Kershaw (born 1973). You can sense that both pieces are created by the same person, using a wide range of sound landscapes. Here a slow-moving melody on horn and double bass sounds together with minimalist pulses in piano and percussion. The tracks also feature a wonderfully shaped whooping solo parts by Paul Harrison and Maximiliano Martín, performed with incredible control.

The introspective Closing In is a tribute to Spanish flamenco guitar player Paco de Lucia (1947-2014). As a leading proponent of the new flamenco style, Paco de Lucia was one of the first flamenco guitarists to branch into classical and jazz. This composition could be described as a sunny, vivid and restless listening experience.

Composer and keyboard player in Edinburgh's Katet, Mike Kearney (born 1983), presents one of his compositions, The Phoenix. It adds funky sound to the mix and covers an even wider stylistic gamut. An atmospheric opening features swirling sonic clouds on electric piano. This is followed by a classically framed string interlude and later, by a funky rhythmic groove in the bass line. Therefore these little pieces are intertwined together as in a musical puzzle. Rick Standley, now on bass guitar, sets the pace as Harrison on piano adds chord blocking and clarinetist Martín flourishes as a solo voice.

The last compositional figure of the CD is the legendary American composer, bandleader, pianist, record producer and inventor of electronic instruments, Raymond Scott (1908-1994). His work is most familiar to audiences from the soundtracks of children's cartoons like Bugs Bunny, Porky Pig and Daffy Duck, The Ren and Stimpy Show, Duckman, Animaniacs, The Oblongs, Batfink, etc. Four of his compositions, which were used in Looney Tunes cartoon shorts, Curley Cue, Portofino, The Penguin and Tobacco Auctioneer, are like glue, linking the structure of this CD. This series of short, characterful programmatic pieces provides light relief to the weightier works.

The Penguin sound truly imitates waddling, Portofino is presented as a gorgeous bossa nova, and Tobacco Auctioneer sounds fast-talking, as it should. These little interludes were a sonic delight, delivered in best swing band style by Mr McFall's Chamber and soloists.

The arrangements of Raymond Scott's compositions were made by the founder and leader of the ensemble - Robert McFall himself, performing as the second violin in the group. The natural search for a repertoire suitable for energetic and imaginative jazz ensemble led Robert McFall into composing himself, as well as arranging pieces of other prominent modern-day creators that color the performance of the ensemble.

In conclusion, this CD is like a vivid kaleidoscope of impromptu freely expressed creativity. The colors in this kaleidoscope are spinning along with the radiant, bright, expressive, elevating and vibrant sound. It makes you awake and exhilarated throughout the entire recording, while adding new colors and instruments to each composition. What a thrilling musical collection to experience!

The background image on this page is derived from a Ministry of Information photo of a Glasgow shipyard in 1944.