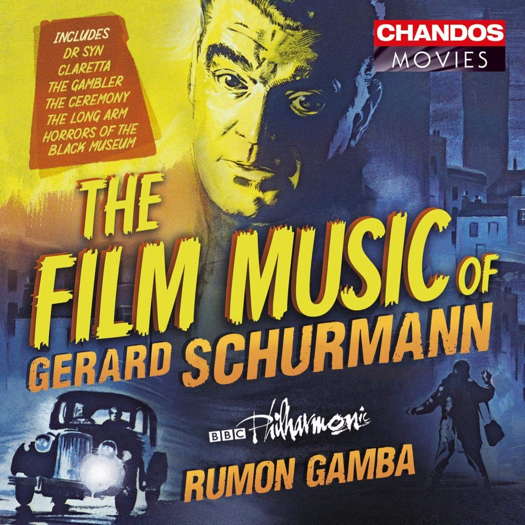 'Notes and sound are superb. A must for film addicts.'

During the Second World War, Gerard Schurmann, who was born in Java in 1924, was not only a promising young composer living in England, but also an active pilot in the RAF. By the 1950s he felt he was ready to embark on a true composing career, and the period seemed to favour the ambitions of the young Schurmann. Indeed, this was a time when film makers were turning to established names of the day such as Vaughan Williams, Walton, Rawsthorne, Arnold and Bliss to provide music for their movies. It was an era of opportunity, but the big snag was that it was also a time when the full-time job of the ‘film composer’ was not yet fully established in England. But being the talent he is, Schurmann was soon composing film music, on assignment, of the highest order.

His compositions came in for high praise, and his name soon started to be associated with colourful symphonic music, full of dramatic impact and a strong visual sense, enabling him to provide a score that complimented and enhanced the events and emotions represented on the screen.

His big break came in 1953, when Alan Rawsthorne was writing the score for the war picture ‘The Cruel Sea’. Pressed for time, the composer was unable to finish the music on schedule and left an important battle-at-sea episode requiring a substantial chunk of musical imagery. Rawsthorne left the job in Gerry’s hands. The piece turned out terrifically good, but despite efforts to secure film work for his pupil and valued collaborator, the chiefs at Ealing Studios were not convinced to entrust one so young and inexperienced to write music for their productions. So Rawsthorne decided to have the score played to producer Michael Balcon and director Charles Freud. The trick worked. Both men expressed great enthusiasm for the score; indeed, they even conceded that it was one of Rawsthorne’s best compositions, especially ‘Battle at Sea’. At this stage the composer let out the secret and Schurmann’s career was on its way.

This splendid addition to the ‘Chandos Movies Series’ has the composer’s fingerprint written all over it, thus enhancing its musical and interpretive value no end. Indeed, Schurmann (who will be ninety-six years old tomorrow) chose and arranged sequences and titles in such a way as to reflect events, actions and underlying emotions expressed in the various pictures, thus capturing the essence of his music for each production.

Notes and sound are superb. A must for film addicts.

The background image on this page is derived from a 2006 public domain photo of St Mary in the Marsh, Romney Marsh, Kent, England.