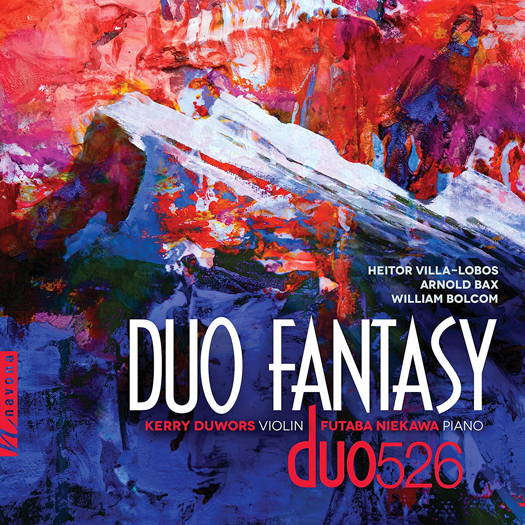 '... the sheer musicianship, combined with flawless technique and imaginative programming, never fails to impress me.'

This very fine disc from a dynamic duo will not fail to impress. The artists, violinist Kerry Duwors and pianist Futaba Niekawa, have been playing together since 2011. They have recorded and travelled widely, and, for me at least, are a rare partnership who truly understand each other and express a wide range of music.

The first work here is a sonata by Heitor Villa-Lobos, entitled Sonata Fantasia No 2. It was completed in 1914 but not published until almost forty years later. Whilst this sonata does not reflect the later styles of this composer, it is fresh and engaging, and I am constantly reminded of French music written around the same period. It is hard to believe that this is by Villa-Lobos.

The first movement starts with a quite extended, rippling piano introduction, before the violin's lyrical, dance-like entry. This unashamedly romantic music does not wallow in excess. Generally, the piano provides the drama and movement, whilst the violin lines are more lyrical.

The thoughtful, rhapsodic central Largo sounds, again, quite French, and has a lightness and clarity. Again the piano opens the movement, and a few bars later the violin enters, soaring effortlessly and serenely above the gently rippling piano part. Apart from the influences of French impressionism, which are felt strongly, there are also strong, more romantic moments, and here this duo shines.

The final movement begins in a playful fashion. Here the two instruments share the thematic material in a more obvious way than previously, so the dance-like subject returns regularly, interspersed by often more reflective passages.

Arnold Bax's Violin Sonata No 2, the longest work on the disc, was composed in 1915 and then revised five years later. The first movement, Fantasy, slow and gloomy, opens in a stately but declamatory style. It is somewhat sombre, but then opens out into a beautiful and livelier section. Bax's music is today perhaps somewhat underrated, but this fine example of his lyrical and somewhat mystical style is definitely impressionistic.

The strange second movement, The Grey Dancer in the Twilight, is gentle and somewhat playful, but underlying a seriousness, as evidently death is the dancer here. This is not the fearful, threatening death though, but rather one of gentle and playful beguilement. The music comes to a halt, and then a very ominous section opens to a serene melody that is almost unearthly, as if the soul has left the body.

The third movement, Very broad and concentrated, is somewhat reflective, and the shape gradually unfolds. This is probably the emotional heart of this work, and required great precision and feeling from both artists, which, as throughout this disc, they display admirably. They show a remarkable understanding of the demands of these long, meandering melodic lines.

The final Allegro feroce provides drama, speed and virtuosity to round off this sonata. There is a Spanish flavour to the opening, but there are many changes of mood and tempi here, and the opening gives way to lyrical violin writing with gently accompanying piano. This soon changes again. It is a most beautiful movement, and because of the changes and variety within, could almost stand as a complete work by itself. After a long pause is a serene and beautiful section which takes up the final third of this movement. This illustrates what a fine composer Bax truly was.

The last work on this remarkable disc is the Duo Fantasy by William Bolcom, composed in 1973. This is in one complete movement, but comprising quite a number of sections with different characters, each reflecting the range of some of the many styles that make up American music. This work is always changing, and it is impossible to predict what is coming next. I think that this would be quite a fun piece to play, and one of the challenges would be to move from one section to the next while keeping the work sounding coherent.

This CD, in my opinion, is one of those 'must buy' discs. I have reviewed a disc of these artists together before, and, like that one, the sheer musicianship, combined with flawless technique and imaginative programming, never fails to impress me.

The background image on this page is derived from the 1920s pastel-on-paper painting Komposition by Moravian-born German painter Adolf Hölzel (1853–1934).