Russian harpsichordist, organist, pianist, writer, broadcaster, music historian and teacher Alexander Evgenievich Maykapar was born in Moscow on 4 December 1946 into a well-connected family. His paternal grandfather was the composer and pianist Samuel Maykapar and his paternal grandmother was the singer Sofia Maykapar. Alexander Maykapar studied piano with Theodor Gutman at the Gnessin Russian Academy of Music and organ with Leonid Roizman at the Moscow Conservatory.

From 1970 he began performing as a harpsichordist, organist and pianist, in Russia and other countries, including Austra, Belgium, Germany, Hungary and Poland. There was a strong emphasis on early music, and particularly J S Bach - he performed and broadcast the complete harpsichord music - plus François Couperin and Franz Joseph Haydn. He recorded five CDs in The Origins of Russian Piano Music series for the British record label Olympia.

He often performed in cycles of concerts under the name The Anthology of Harpsichord Music.

He wrote many volumes about music and also translated several important texts into Russian. He also wrote popular articles about music for newspapers and broadcast for the BBC as a commentator.  The subjects of his writings could be quite broad, such as The Facets of Classical Music - two volumes of essays, 2013-14. He was also interested in paintings, especially those concerning religion or music, and especially composers' portraits :

'[J S] Bach contributed to the [Leipzig] Society [for Musical Sciences] his portrait on which he holds in his hand one of the submitted works, the Canon triplex a 6 voc. Comparing the handwriting of Bach's original score with the way it looks in the [1746] painting [by Elias Gottlob Haussmann], one can clearly see that it was this score that Haussmann used as the prototype ... it seems that in this portrait, Bach offers this canon for us to decipher: the way he holds the score sheet, turned towards the viewer, and lets us read it easily ... the three voices of the canon are written by the composer himself, and even in this form this piece is already harmonious.' - Alexander Maykapar, The Secrets of Composers’ Portraits, translated and edited by Maria Danova.

Maykapar was also known for organising music festivals - particularly those held in the Armoury Chamber of the Kremlin Palace in Moscow. 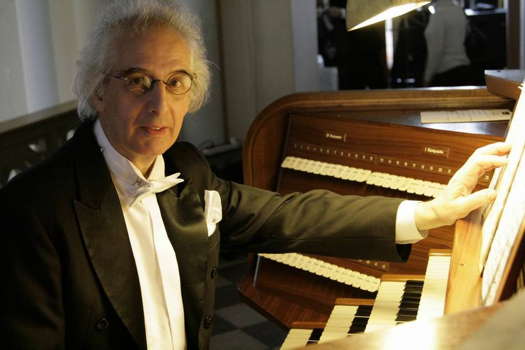 From 2010 he taught harpsichord at the Gnessin Russian Academy of Music.  He was also a harpsichord teacher at the Schnittke Moscow State Institute of Music. Towards the end of his life he wrote an autobiographical novel in 2017 and, in 2020, the book My life (and death) in art. Diary of the Coronavirus Era. During the Coronavirus pandemic he also recorded the History of Ideas in European Art series of lectures for remote screening.

A selection of articles about Alexander Maykapar