George Henry Balcombe was born in Brighton on 22 May 1927. He trained as an architect (later working on Brasilia and winning a RIBA Silver Medal for his essay on the same subject, and becoming one of Canada's youngest professors of architecture). His other interests included classical music, languages and dogs. With his partner, the writer Robin Bryans, Balcombe travelled extensively.

From the 1980s, when they moved to London, Balcombe played violin in various amateur orchestras and took up composition, later producing a wind dectet arrangement of Carnival of the Animals for Lawrence Leonard's wind group at Morley College. Balcombe and Bryans also ran a succession of musical houses, attracting established composers and performers from the London scene. From the mid-1980s George mentored Daniel Schorno, the grandson of an old Swiss friend, studying in London, who went on to become artistic director of STEIM in Amsterdam, and a significant composer. 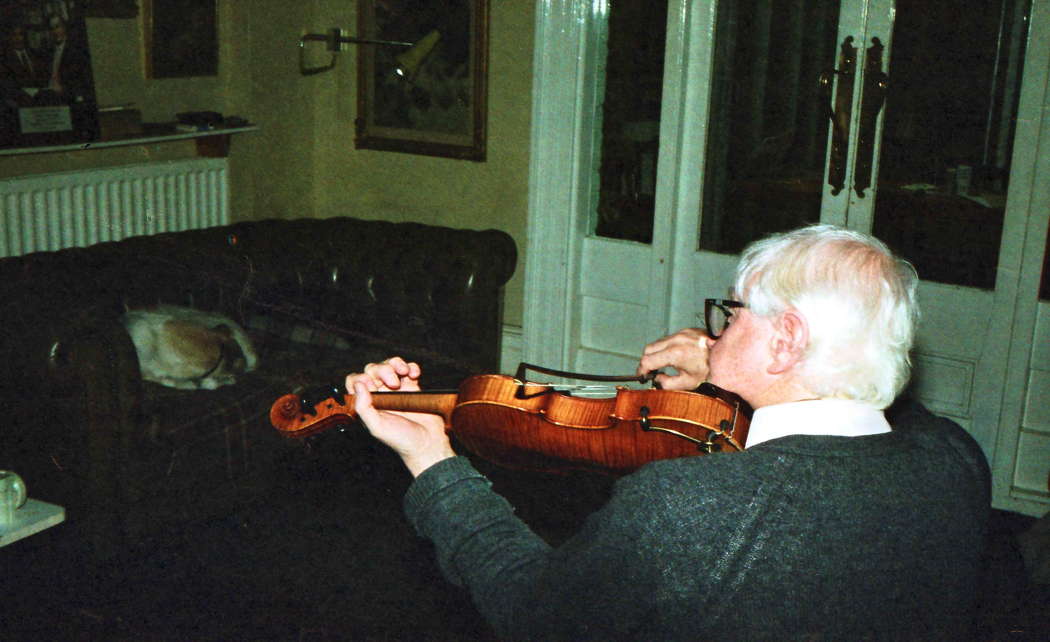 George Balcombe (1927-2015) at his West Ealing home in the early 1990s, playing to a largely canine audience. Photo © Daniel Schorno

After Robin Bryans passed away in 2005, George Balcombe began to review CDs for Music & Vision, continuing until the onset of dementia in 2012 began to make writing difficult.

The Goldberg Variations and The Art of Fugue. '... musical richness and instrumental knowledge ...'

Interpretations by Stephen Gutman. '... not a million miles away from jazz.'

Choral music from Latvia, Lithuania and Estonia. '... such clarity ...'

Works by Fauré for Cello and Piano. '... a profoundly moving sound ...'

A selection of Christmas music. '... an amazing collection.'

Music from Venice. '... an amazing display of eighteen short pieces ...'

Music by Julius Röntgen and Per Nørgård. 'How could any audience resist ... ?'

A recording by The Brahms Trio Prague

Romantic music for piano and orchestra

A book about Shostakovich

Music by Sweelinck and his pupils. '... a brilliant performance ...'