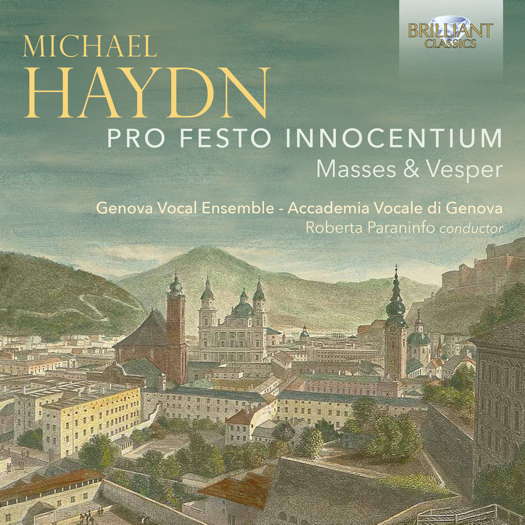 From 1763 until his death in 1806, Johann Michael Haydn worked in the service of the Archbishop of Salzburg – almost as long a period of service as that of his brother Joseph to the princely family in Esterhazy. During the course of those forty-three years, he bridged the stylistic gap between early Classicism and the Biedermeier style. Indeed, he was initially regarded by contemporaries as equal in talent to Joseph. Only the older brother's steep rise to become the most important instrumental composer of his day somewhat overshadowed Johann Michael Haydn. In recent years his music has been rediscovered, and he has increasingly been recognized again. His output includes more than thirty works in Latin or German for two or three lines of upper voices, composed for his 'dear choirboys' singing at the cathedral in Salzburg. The first setting of the ordinary in this series was the Missa Sancti Aloysii, composed in 1777. It was initially intended for the Commemoration of the Holy Innocents on 28 December, when the chapel boys celebrated their principal feast day. This exceptionally charming mass is marked throughout by a wonderfully effervescent sense of joy. At the other end of his career, the Missa sub titulo Sancti Leopoldi pro festo Innocentium was Michael Haydn's last completed work, finished on 22 December 1805 in time to celebrate the same feast day as the earlier Mass, despite the composer's ill health, and drawing strength (according to the composer) from the optimistic character of his pupils. Complementing these two Mass settings, the Accademia Vocale di Genova and Roberta Paraninfo present a complete recording of the Vespers which Haydn wrote for the Feast of the Holy Innocents in 1787. Though these attractive choral rarities have been recorded before, this is the only album to present all three complementary works together, and in modern recordings informed by the scale and performance practice which the composer himself would have known. Roberta Paraninfo founded the Accademia Vocale di Genova in 1995, and they have specialised ever since then in choral works of the Renaissance, Baroque and Classical periods.

Recorded 2-4 July 2021 at the Sanctuary of the Madonna del Monte, Genova, Italy.