Trevor Duncan was born in Camberwell, London, on 27 February 1924. By twelve he could play the piano by ear, but wanted to learn to read and compose music properly. Thus, for one year he attended the Trinity College of Music for an extended course in violin, harmony and counterpoint. However, his early knowledge of music was largely self-taught. At eighteen, Duncan joined the BBC, assisting in the production of radio plays. In 1943 he was conscripted into the RAF, where he became a wireless operator. In 1947 he turned down an opportunity to go to Cambridge University, but decided to return to the BBC as a sound and balance engineer, working with many light orchestras. However, the BBC restricted its own employees from having music performed on air. Duncan got his way though, by writing music to be recorded for newsreels and other companies not connected with the BBC.

Ray Martin's approval of High Heels encouraged Duncan to approach Boosey and Hawkes, who approved it for recording. The piece was a big smash hit, and in the next few years the composer became one of the most prolific writers of so-called 'mood' music. In 1954 Duncan was promoted to be a music producer, but his growing fame did not permit him to keep his BBC identity separate. This conflict of interests brought about Duncan's decision to part ways with the BBC and seek pastures new as a full-time composer. This split came about in 1956. In 1959, Duncan composed his two most famous works, The Girl from Corsica and the Little Suite. However, by that time light music began to be heard less, and this induced the composer to turn to more serious orchestral works. Until the very end, Duncan continued composing, living with his wife and daughter in Somerset. He died in Taunton on 17 December 2005, aged eighty-one.

This very attractive compilation opens with 20th Century Express (1951), a highly descriptive piece which he originally called 'Making Tracks'. Its lively rhythms caught the public's attention overnight, and it soon became one of his greatest successes.

A Little Suite (1959) was considered by Duncan as absolute music, and the use of the March by BBC Television for its Dr Finlay's Casebook series resulted in a glut of commercial recordings, but this is the first time that the other two movements have been included as well. In certain passages deliberate repetition is used to create a stunning effect, especially in 'Jogtrot', where Duncan displays his ability to change the sequence at precisely the right time. Indeed, in this third movement of this suite, it is so very interesting to hear melodies from both the 'March' and the 'Lullaby' worked into the 'Jogtrot'.

The famous High Heels (1949) possesses warmth, charm and a fresh appeal that set it apart from many other works of that period. The piece probably owes its joie de vivre to the fact that it was written at the time when the composer married his first wife Becky. Duncan was so pleased with his creation that he never felt the need to revise it.

Children in the Park (1954) is a delightful series of short musical portraits which cleverly reflect the carefree, innocent world of young children. The titles, 'Dancing for Joy', 'At the Pool' and 'Hide and Seek', speak for themselves.

Serenade (In the Style of Schubert) comes from the full suite, Maestro Variations (1967), in which the composer attempted to recreate the various styles of some of the great classical writers, in this instance, that of the immortal Franz Schubert.

The Girl from Corsica (1958) is such a wistful work that it is almost surely not entirely imaginary. Duncan uses as his inspiration the memory of a girl he had met on a holiday a year before he immortalised her charms in music. Half French and half Corsican, this young lady realised the impression she had made, but the relationship remained spiritual. The coda, you will notice, ends suspended on an unresolved chord.

Meadow Mist (A Pastoral Soliloquy) (1954) is a delicate tone poem. The composer, like almost every harmony-conscious musician on earth, admits his compulsion to applaud Robert Farnon's contribution to music. This work acknowledges his influence deep down among the string harmonies that one hears in this sensuous piece.

Valse mignonette (1959) is a delicious portrait of a little French child, happily at play. A special feature is the close contact of piccolo and flute, making a pleasing dissonance. Interesting to note is the legato section, which is, indeed, the same melody. Again, Duncan cleverly employs a repetitive figure with agreeable results.

Wine Festival (1958) is another piece inspired by a Mediterranean flavour. The work imagines the sunny south of France, where no-one needs an excuse to celebrate the riches of the vine.

Sixpenny Ride (1964) is a bright and breezy number, faithfully conveying the open-air freshness, while Enchanted April (1958), which Duncan originally called 'The Olive Grove', is a composition written for a television programme, which the public took to heart unreservedly.

St Boniface Down (An Idyll) (1956) is named after an area on the south coast of the Isle of Wight. Dedicated to C Gurrieri (the Girl from Corsica), who came from the Auvergne, this work, in Duncan's own words, celebrates a silent walk along the ridge of St Boniface Down, which was followed by a beautiful correspondence for some weeks. In the string subject, the metre of a Paul Verlaine line is heard: 'Il pleur dans mon coeur comme il pleut sur la ville'.

La Torrida (1958) was commissioned by the late Monia Liter, when he headed the Light Music Department of Boosey and Hawkes. Monia Liter loved Spain and he wanted a piece about the bull - wild, fiery and full of vitality. The score is based on three Spanish guitar chords, and this piece is an interesting example of what an orchestral composer can do with three chords.

The Visionaries: Grand March (1958) is part of an impressive suite that includes five other movements. 'Grand March' refers to the length of the piece and not the quality of the music which is, nonetheless, stirringly exciting.

Little Debbie (1959) is an exuberant and charming cameo dedicated to the composer's elder daughter Deborah, from his first marriage.

This programme is simply irresistible and showcases a composer whose wellspring of melodic invention was almost never ending. Indeed, Duncan, whose real name was Leonard Charles Trebilco, was an inspiration for other composers of his age, and all throughout his career he was consistently capable of writing music full of sensuous romance, breezy scene setting, delicate tone painting and, above all, glittering glamour.

Similar to other issues in this series, this disc was recorded way back in the 1990s - April 1993 to be precise - by Marco Polo, so all credit to Naxos for presenting this wonderful opportunity to all aficionados of this music to enjoy and assess afresh some of the best melodies ever composed in this genre. With all that's going on around us, we do need some light musical medicine to raise the spirits. Well, Volume 8 in this cycle should do the trick. Sound and annotations are first-rate. 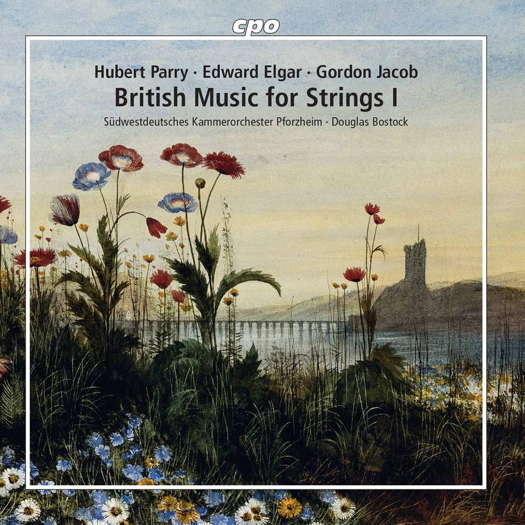 During the Victorian era, English music went through a renaissance in practically all genres, particularly in the choral and orchestral spheres. It was during this period, and in subsequent decades, that British string music experienced a timely revival that inspired a host of composers to write some truly memorable works for a strings ensemble.

This first volume from CPO of British Music for Strings is a source of great expectation, and the start could not have been more auspicious. Sir Hubert Parry (1848-1918) is famous for his great orchestral and choral pieces, but he also composed many a work on a smaller scale, such as the English Suite on this recording.

In 1894 the composer completed his Lady Radnor Suite, dedicated to Lady Radnor for her pioneering work in the musical field, where she succeeded in forming a string orchestra made up of amateur ladies which she herself conducted for fifteen years after 1881. This suite was an encouraging success, and this spurred Parry to write a number of short pieces for a second suite. Eventually, this became the English Suite which, sadly, was not finished when the composer died in 1918. The piece was put together by his long-term student Dr Emily Daymond, who also supervised the edit and publication. Premiered in June 1920, the Suite was very well received, and with its natural flow and wide variety of string techniques and textures, both audiences and critics lauded its rich distinctive sound.

Edward Elgar (1857-1934) wrote his Organ Sonata in 1895, when he was on the brink of achieving the recognition he so much craved for. Because of its symphonic treatment several observers have been tempted to believe that this was a missed opportunity to compose a full-scale symphony, an impression reinforced by Gordon Jacob (1895-1984), whose 1946 orchestration of it proved the point. Jacob's version was discarded at the time and, consequently, it has fallen into unjust neglect. Luckily, the Austrian composer and arranger Hans Kunstovny, despite not knowing of Jacob's version, decided to orchestrate the Sonata for String Orchestra. This adaptation was premiered in October 2006, and the conductor on this recording revived it in January 2020 in a concert attended by Kunstovny himself. The latter gave the piece the subtitle 'Swinnerton's Dream', referring to the organist and choir master Charles Swinnerton Heap, who championed Elgar's music in the 1890s, and to whom Elgar dedicated his Sonata. With its four contrasting movements alternating between vigorous happy moments and emotionally intense ones, the piece makes fascinating listening, and is certainly one of Elgar's best compositions, before hitting the mark with the Enigma Variations of 1899.

Gordon Jacob is undoubtedly the most prolific British composer of the twentieth century. He composed or arranged more than seven hundred pieces, and wrote profusely in every genre except opera. Among this myriad of works one finds three symphonies - the first composed in 1929, the other two in 1943. The Symphony for String Orchestra is the third, and was commissioned by the celebrated Boyd Neel String Orchestra. The work is in three movements and opens with a strident and dissonant introduction followed by a grim and gritty Allegro. The Andante espressivo is a gorgeous mainly quiet concert piece for violin solo and strings, while the final Allegro molto vivace, with its rhythmic opening motif and insistent running semiquavers, generates a mood of resolution and final affirmation.

To say that Douglas Bostock has his heart wrapped around these works is a huge understatement. Indeed, his meticulously detailed yet full-blooded conducting draws from his Southwest German Chamber Orchestra Pforzheim players performances of the utmost expressivity full of warmth and gusto, and the flow of the music is consistently graceful and natural. This is an absolute peach of a first volume in this series dedicated to British string music that promises to be as exciting as it is imaginative. Sound and annotations are first-rate.

The background image on this page has been derived from Near Oban (1843) by Edward Gennys Fanshawe (1814-1906), a British Royal Navy officer who became Commander-in-Chief at Portsmouth, and who was also a gifted amateur artist.