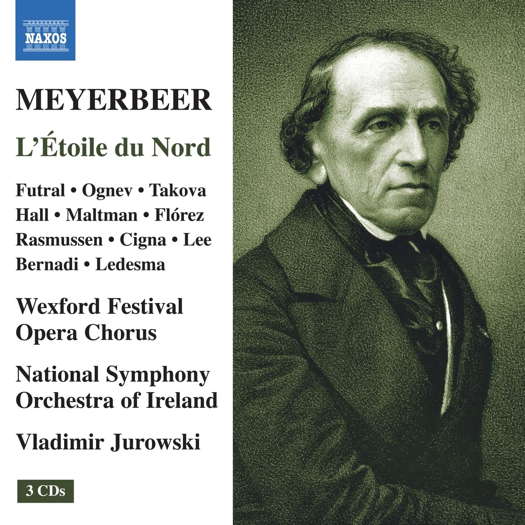 L'Étoile du Nord ('The North Star', opera in three acts, 1854, to a libretto by Eugène Scribe)

The first two tracks of CD1 were missing from the digital copy of this album sent for review.

Recorded live on 27 and 30 October and 2 November 1996 at the Wexford Festival in Ireland.

After composing a spectacular series of grand operas for the Paris Opéra, Meyerbeer turned to two comic operas with spoken dialogue. One of these was L'Étoile du Nord ('The North Star') which is strictly an opéra de demi-caractère, containing both comic and serious elements. This fusion was one of Meyerbeer's most important contributions to the development of grand opera. The plot is a peculiar mixture of village wooing and military life, with music that is full of colour, featuring superb choruses and exceptional orchestration. This 1996 Wexford Festival Opera production features a dazzling young cast under the direction of Vladimir Jurowski.