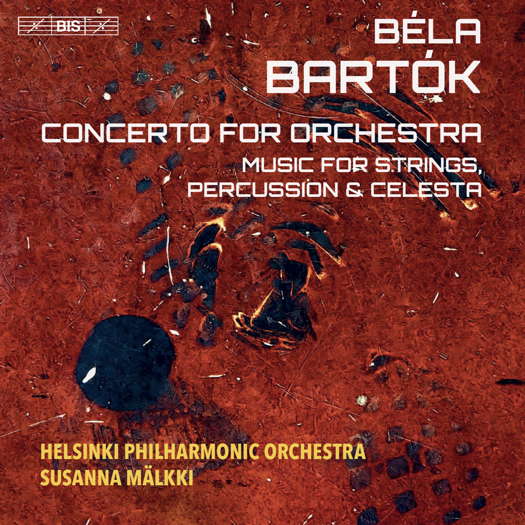 This program comprises too much music, too heavily scored, to have fit on a vinyl record, but it works on silver disc. It's also logical, bringing out an unexpected kinship between the two scores, with melodic and rhythmic gestures from the familiar Concerto popping up in the other piece, and, sometimes, vice versa.

Susanna Mälkki's musical, well-organized performances avoid the customary 'hard sell'; in passages that other conductors aggressively overstate, she opts for an easier, more natural unfolding. Tempi are generally a bit more relaxed than the norm: note the spacious, sinuous oboe and clarinet soli in the Concerto's first movement, and the little fugal episode in the bustling Finale.

Neither does the conductor shortchange the Concerto's opportunities for display -- it is a 'concerto' -- though her approach suits some movements better than others. The first movement, with slender bassi in the atmospheric opening, builds with clear textures and purpose, though, in the home stretch, the brasses' sort-of-pyramids get stiff and clunky. The Giuoco delle coppie has an easy flow and pointed accents.

The opening of the Elegia is quietly mysterious, with Mälkki keeping the 'answering' outbursts proportionate; but the movement becomes aimless, more or less elapsing. The Intermezzo's opening call to attention brings things back to life; the music flows with brisk assurance, its second theme more heartfelt than anything in the Elegia.

The bustling, frolicking Finale is impressive, but this brass climax, too, while impressive, feels 'stuck'.

The MuSPaC, as I'll call it, supplies an interesting foil. In the searching opening fugue, Mälkki's soft-edged attacks produce a slightly furry tone, yet there is nothing tentative about it: it unfolds clearly, with as firm a sense of direction as in Reiner's classic account (RCA).

The arrival at 4:26, while intensely powerful, isn't overdone; the celesta, when it finally enters, makes an eerie effect. The Allegro's full-bodied opening paragraph rolls along with assurance, the sudden tempo pickup adept; the return is a bit slurry.

The textures and harmonies of the Adagio bring a distinct 'modern music' sound, though with a firmer rhythmic framework than much of the academic stuff I remember. In the closing Allegro molto, the irregular rhythms are expertly done, with an unexpectedly dancey second theme.

The final cadence, however, usually a quick, flashy windup, is here deliberate and emphatic, and I'm not convinced.

The Helsinki Philharmonic sounds good, with expressive reeds and resonant strings, though, in the first movement of MuSPaC, the high violins bear a hint of a whistle. The round, deep reproduction does full justice to the brasses.

The background image on this page has been derived from old lithography, circa 1700, of Miskolc in Northern Hungary, depicting the view from Avas Hill.