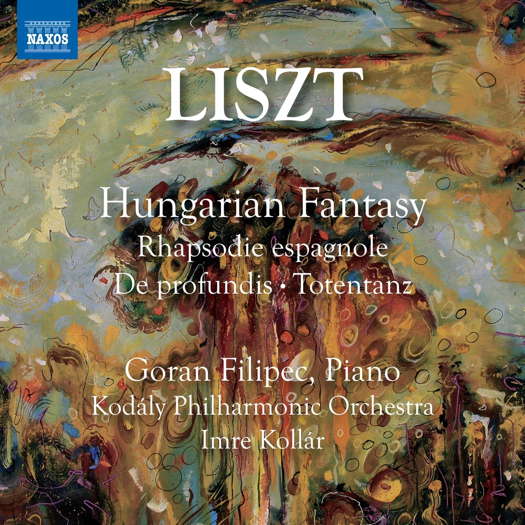 '... a very good anthology of Liszt's works for piano and orchestra.'

This Naxos CD includes four comparatively short works by Franz Liszt for piano and orchestra recorded by the Kodály Philharmonic Orchestra with Goran Philipec as piano soloist: the Hungarian Fantasy; the Rapsodie Espagnole as transcribed by Ferruccio Busoni; the De Profundis; and the Totentanz. Of Franz Liszt's vast production, these works belong to the 1834-1858 period - a phase of his full maturity.

The Fantasia on Hungarian Folk Melodies, commonly known in short form simply as the Hungarian Fantasy, is Franz Liszt's arrangement for piano and orchestra of his Hungarian Rhapsody No 14, originally for solo piano. The Fantasia was written in 1852, and it had its debut in Pest on 1 June 1853, with Hans von Bülow as soloist and Ferenc Erkel conducting the orchestra.

During Liszt's lifetime, his Hungarian Rhapsodies were among his most popular works. Because of this popularity, he may have been under pressure to produce versions of them for piano and orchestra. The present work is the only such work that Liszt himself is known to have produced. However, at the end of his life, he may have helped his student Sophie Menter with her Concerto in the Hungarian Style (1885), a work clearly influenced by the Hungarian Fantasy.

The rendering on this CD underlines the slow introduction by the orchestra, followed by a solo cadenza before proceeding to the main body of the work. The bold, march-like main theme is the Hungarian folk song Mohac's Field, with a long-short-short-long rhythm. While much of the piece's thematic material is derived from this song, there is also a section in A minor marked 'in gypsy style' (alla zingarese).

While the Fantasia is in the same style and tradition as the Hungarian Rhapsodies, it differs structurally from them. The rhapsodies generally present a clear succession of two traditional scales. These dances are evident in the Fantasia, particularly in the long and brilliant friska section. However, Liszt is freer and wider-ranging in his combination and juxtaposition of material than he usually is in this type of work. The dialogue between Goran Philipec and the Kodály Philharmonic Orchestra is quite intense.

Rhapsodie espagnole is a composition for solo piano dated 1858. The piece is very suggestive of traditional Spanish music, and was inspired by Liszt's tour in Spain and Portugal in 1845. This short fourteen minute piece contains many extreme technical challenges, including rapid chords and octaves. Ferruccio Busoni arranged it for piano and orchestra in 1894. It includes free variations on La Folia and Jota Aragonesa and opens with a cadenza including blind octaves. It is a virtuoso piece where Goran Philipec shows his skills.

De Profundis is this CD's central piece. It lasts thirty minutes and is presented in the version completed by Jay Rosembalt in 1989-90; the original score dates from 1834. The structure of the De Profundis is remarkable, both in itself and for what it presages in Liszt's symphonic witing. It is a vast sonata movement, containing a slow movement and a contrasting scherzo in the form of a polonaise, and ending with a coda based on the slow movement but transformed into a march. The principal tonality is D minor, but the slow movement is in A flat and the polonaise is in C sharp minor. The difficult question in terms of the serious and quite religious nature of the work is how to account for the polonaise. There is certainly nothing in the text of the psalm to account for it. Had the piece come from Liszt's later life it would be easy to see a tribute to the Princess zu Sayn-Wittgenstein. Berlioz had introduced Liszt to Gérard de Nerval's French translation of the first part of Goethe's Faust in December 1830. It may not be too wide of the mark to see the Faust programme in the whole work: brooding, questioning, prayer, temptation and redemption are all in the piece, alongside the cry of the psalmist for God's forgiveness. I sensed this reading in the performance on this CD.

Liszt's artistic preoccupation with death is exemplified by his imaginative short masterpiece, Totentanz. It translates as 'Dance of Death', literally, and the term refers to a long tradition in the visual arts. Liszt specifically seems to have been inspired by Hans Holbein the Younger's Todtentanz, a series of woodcut prints that depict the age-old theme of equality before death: in Holbein's series, Death, personified as a skeleton, comes for all, from the greatest of the great to the lowliest of the low. Holbein's woodcuts have a sharp sense of satire, mocking the worldliness of spiritual and temporal authority figures. Additional inspiration came in 1838, when Liszt visited the Camposanto in Pisa and was awed by The Triumph of Death, a monumental fresco that contains several scenes. Once more, a Busoni 1919 version is offered on this CD, originally dated 1849. Goran Philipec and the Kodály Philharmonic Orchestra emphasize the visual art inspiration and the very skilful counterpoint.

In short, this is a very good anthology of Liszt's works for piano and orchestra.

The background image on this page has been derived from the fresco The Last Judgement by Michelangelo (1475-1564), created between 1536 and 1541.