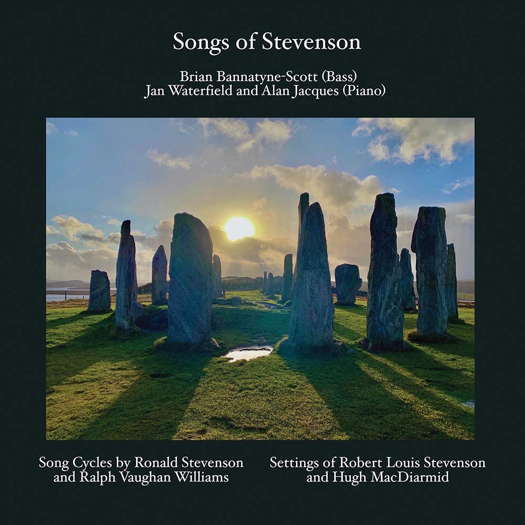 I first heard the bass Brian Bannatyne-Scott singing Wotan in the first complete Ring Cycle at Longborough Festival Opera. I have to admit I thought his interpretation – and his voice – absolutely superb. Could he even match the great Sir Donald McIntyre, who sang Wotan and The Wanderer the second time round at Longborough? I think so. Bannatyne-Scott produced a particularly poignant, emotional and intense figure for the god. He exuded will power, and his energy and vigour exuded authority and dominion, mastery and command.

Now Bannatyne-Scott has produced a disc of his own, largely containing music from his native Scotland. Entitled Songs of Stevenson, it features two song cycles with texts by the poet Robert Louis Stevenson - one in conjunction with Hugh MacDiarmid (Christopher Grieve) – and one each by the composers F G (Francis George) Scott and (coincidentally) Ronald Stevenson.

It has to be said that the earlier (Stevenson) songs sound somewhat (quite a lot) too forceful. Yet if one turns down the volume, and especially at the close of several songs, the sound is charming and the result excellent. The first song, 'Blows the Wind Today' (the two Stevensons), descends to a gentle end. 'In the Highlands' does much the same.

One of the most charming and touching is 'The Eemis Stane', a poem by MacDiarmid that seems somewhat mysterious.

'From Factories and Fields' is another where the piano accompaniment is especially meaningful.

Bannatyne-Scott completes his cycles with the exquisite nine songs from Vaughan Williams' Songs of Travel. It has to be said, I think, that these are the most successful on the disc. 'The Roadside Fire' for instance, is beautifully sung, the fourth, 'Youth and Love' is almost whispered, and, as so often, both the pianist and Bannatyne-Scott complete the song enchantingly. 'The Infinite Shining Heavens' is, appropriately, gentle and perhaps the most soft of all. And the last, arguably less well known, 'I have Trod the Upward and the Downward Slope', is arguably best of all: indeed nigh on perfect.

This is a notably original disc, therefore, which – apart from a few overdone tracks - proves well worth exploring.

The background image on this page has been derived from a 1998 photograph of the Scottish island of Mull, possibly taken from Oban on the West Coast, by Keith Bramich.