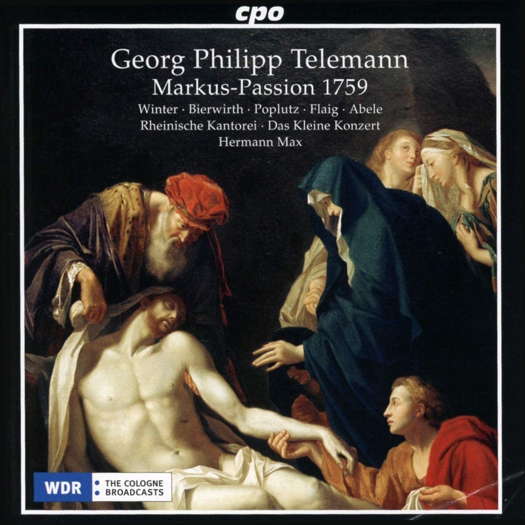 'Hermann Max, a specialist not only of baroque but especially of Georg Philipp Telemann, conducts Das Kleine Konzert with rigor and flair as well as emphasis on the dramatic impact of the recitatives and on the moral content of the arias.'

Dramatic power is the key element of this recording of a recently discovered Georg Philipp Telemann's score.

Between 1716 and 1767, Georg Philipp Telemann wrote a series of Passions, musical compositions reflecting on Christ's Passion – the physical, spiritual and mental suffering of Jesus from the hours prior to his trial through to his crucifixion. The works were written for performance in German churches in the days before Easter. A prolific composer, Telemann wrote over forty Passions for the churches of Hamburg alone, of which twenty-two have survived, according to the state of research until a few years ago. He also wrote several Passion oratorios. Unlike the Passions intended for liturgical performance, they were not closely set to the literal text of the Gospels.

Stylistically, there are many differences between these works by Telemann and Johann Sebastian Bach's Passions. The Telemann Passions were (unlike J S Bach's Leipzig Passions) were written for and used in the context of the regular church services for Hamburg's five main churches. As a result, the Hamburg Passions of the late eighteenth century are relatively short, lasting little more than an hour in performance, because they were used in regular Sunday services during Lent, not in the context of a separate Passion service, as in the Good Friday Vespers in Leipzig.

Another different element between the Telemann and J S Bach works is viewpoint. Telemann was not a 'preacher' like Bach was, although he did have a theological background and education. Telemann's viewpoint was that of the Enlightenment, which placed less emphasis on Christ's divinity and more on his humanity (to the extent that in many arias in both Telemann's and Bach's works, Christ is referred to as Menschenfreund (Friend of Man). They emphasize less Christ as the revelation of God's will for the world and revelation of prophecy and divine grace, less Christ the Word incarnate, less Christ the Lamb of God, and more Christ the man, the healer, the sufferer. In opposition to this is Bach the Fifth Evangelist, Bach the Mystic, Bach the Orthodox Lutheran. One way that this difference is evidenced is the way Telemann and Bach approach the word of Scripture. Bach does not alter one iota of the scriptural word, he writes the words of Scripture in red ink, and his whole attitude is that Scripture is supreme. In opposition to this is Telemann, who treats Scripture in his own manner. Finally, Telemann employs a more lyric style than Bach does. While there are places in Bach's Passions where he does employ more flourishes in the recitatives, these are usually few and far between. Bach usually uses a word-and-music form where the music is made to fit the words. Telemann, however, fits the words to the music that he writes, to the extent that many parts of recitatives are either elongated or repeated verbatim.

This general overview is useful to appreciate this CD, the first recording of a previously unknown score of the St Mark Passion falsely ascribed to the Magdeburg music director and composer Johann Heinrich Rolle. The score recently came to light in the Library of the Royal Conservatory in Brussels. On the basis of the new identification of the copyist's hand, a largely original version of Georg Philipp Telemann's St Mark's Passion of 1759 is now available, and it is on this version that this recording draws. Freshly penned poetical reflections were added to the Evangelist's text. The anonymous, theologically educated author of these reflective arias and accompagnati recitatives, in consultation with the composer, also chose the selection of church songs and designed the overall structure of the libretto, coordinated the sacred message of the text with a finely calculated affective dramaturgy. The various affective areas developed by the composer are in each case modelled on the situations depicted in the recitatives. Here extremely harsh affective contrasts could exist side by side within a single aria. Moreover, in Telemann's accompagnati, his dramatic depictive artistry is even more apparent than in the arias. It is a highly dramatic, not flowery, baroque with as many as sixty-five numbers, including recitatives, in less than a hour and a half, the timing of a church service during Lent.

Remarkably, for the Evangelist's part, the recently discovered source prescribes a male alto, not the otherwise customary tenor. This is not a unique case; in his other Passions composed between 1758 and 1766 Telemann also uses voices other than the tenor for the narrator's part. The reasons for this departure from the norm are uncertain. All that we know is that during this period Telemann experienced some difficulties with his new tenor Wilhelm Jacob Credius (1724-78). However, it is also known that Carl Philipp Emanuel Bach, Telemann's successor as music director, assigned the Evangelist's part to various voice registers. For the present recording Hermann Max decided to transpose the alto part down by an octave into the baritone range, as Georg Michael Telemann, the composer's grandson, had done in his version of the work.

Hermann Max, a specialist not only of baroque but especially of Georg Philipp Telemann, conducts Das Kleine Konzert with rigor and flair as well as emphasis on the dramatic impact of the recitatives and on the moral content of the arias. This can be felt from the very beginning when, after a choral introduction by the Reinische Kantorei, the Evangelist, tenor Georg Poplutz, sets the stage with a very short recitative followed by a light and breezy air by the Angel - soprano Veronica Winter.

Judas' betrayal, when the narration by the Evangelist is followed by the aria of the allegorical figure Zeal, sung by bass-baritone Ekkehard Abele, is highly tense.

The utmost drama is, of course, at the crucifixion, when chorales, recitatives and arias interact and all the singers have a role.

In short, an important discovery.

The background image on this page has been derived from an anonymous 1860 painting of The Passion, entitled El beso de Judas.