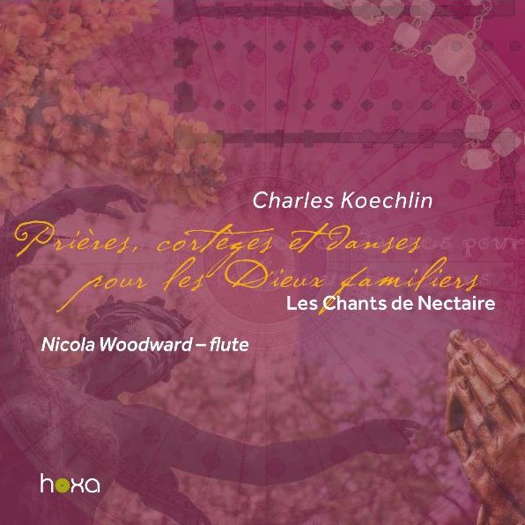 '... Nicola Woodward's playing is sumptuous, insightful and virtuosic when it needs to be, without ever being flashy.'

I have previously reviewed discs one and two of the three disc set of this remarkable work for solo flute. At the time I thought there was only one other complete recording of French composer Charles Koechlin's Les Chants de Nectaire but have since learned that there are at least four.

The third set that occupies this disc is entitled Prayers, Processions and Dances for Familiar Gods. It comprises thirty-two short pieces, all being under five minutes in length. They vary in mood as some are prayers and tend to be meditative in nature, others are dances and a few are hymns. The titles are descriptive and the music evocative.

This music requires a flautist with a high ability to portray the different moods, and provide sufficient interest for over an hour of solo music for a melody instrument.

As on the previous two discs, Nicola Woodward's playing is sumptuous, insightful and virtuosic when it needs to be, without ever being flashy. The lines are often very long and I think her breath control is admirable.

I find that there is plenty to interest me over the whole disc. The playing time of this CD is about seventy-two minutes, and I like to listen to it at a very quiet time of the day when I am in a reflective mood.

I think this recording would be an absolute delight for flute players and lovers of the instrument.

The background image on this page has been derived from the Symbolist painting Cliff by the Sea (1905) by Lithuanian artist Mikalojus Konstantinas Curlionis (1875-1911).