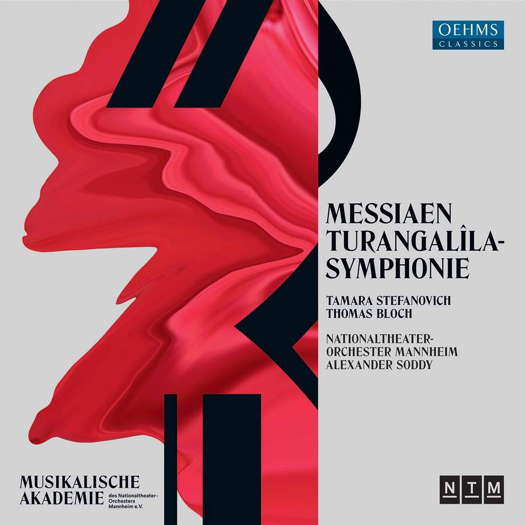 'On this rendering, British conductor Alexander Soddy handles very well the Nationaltheater Orchester of Mannheim, where he is general director of music, and the two soloists, Tamara Stefanovich at the piano and Thomas Bloch at the Ondes Martinot.'

Most of Messiaen's compositions are religious in inspiration. In 1947-38, at the time of writing this extended ten movement symphony with a total playing time of about eighty minutes, he was fascinated by the myth of, and by Wagner's opera on Tristan und Isolde. The Turangalîla Symphony forms the central work in a trilogy of compositions concerned with the themes of romantic love and death; the other pieces are Harawi for piano and soprano and Cinq rechants for unaccompanied choir. When asked about the work's duration in its ten movements and about the reason for the use of the Ondes Martenot (a precursor of electronic music), Messiaen simply replied, 'It's a love song'.

The concept of a rhythmic scale corresponding to the chromatic scale of pitches occurs in Messiaen's work as early as 1944, in the Vingt regards sur l'enfant-Jésus. However, the arrangement of such durations into a fixed series occurs for the first time in the opening episode of the movement 'Turangalîla 2' in this work.

This is an important historical step toward the concept of integral serialism as rightly pointed out by Robert Sherlaw Johnson in his major book, Messiaen.

The title of the work, and those of its movements, were a late addition to the project, chosen after Messiaen made a list of the work's ten movements. He described the name in his letters from 1947–1948. He derived the title from two Sanskrit words, turanga and līlā, which he explained as follows:

'Lîla' literally means play, but play in the sense of the divine action upon the cosmos, the play of creation, destruction, reconstruction, the play of life and death. 'Lîla' is also love. 'Turanga' is the time that runs, like a galloping horse; the time that flows, like sand in an hourglass. 'Turanga' is movement and rhythm. 'Turangalîla' therefore means all at once: love song, hymn to joy, time, movement, rhythm, life and death.

In addition, Messiaen described the joy of Turangalîla as 'superhuman, overflowing, blinding'.

There are about twenty recordings of Turangalîla available commercially. This is a clear indication that this symphony attracts conductors and audience even though it requires a large orchestra and two soloists. One is a pianist; the other plays the Ondes Martenot. This instrument is named after his inventor, the engineer and cellist Maurice Martenot. As a radio telegrapher during World War I, he was struck by the purity of sound produced by the valves which he worked with. This led him, after many years of research, to present the instrument in a concert at the Paris Opera in 1928.

The instrument fascinated Messiaen; on my shelves, I have a CD produced a few years ago by ReR Megacorp, located in Surrey, UK, with Messiaen's composition for the Ondes Martinot dated around 1930-1935.

In this rendering, British conductor Alexander Soddy handles very well the Nationaltheater Orchester of Mannheim, where he is general director of music, and the two soloists, Tamara Stefanovich at the piano and Thomas Bloch at the Ondes Martinot. The central the theme of love and death, as a key part of God Almighty's creation, comes out very clearly. The sophisticated writing stands out in the two love songs - tracks 2 and 4. In the first, after an atonal introduction, the movement is built on an alternation of a fast and passionate theme dominated by the trumpets, and a soft and gentle theme for the strings and Ondes.

In the latter, introduced by a scherzo for piccolo and bassoon, the movement is in nine sections, some of which recall and develop music heard earlier. A calm coda in A major brings it to a close.

The 'love theme' in the strings and Ondes is a keystone of the sixth movement (track 6), where it is accompanied by idealized birdsong played by the piano, and by other orchestral coloristic effects to mean that the two lovers are enclosed in love's sleep.

Of very high class is the finale, which, on this live recording, ends with applause and accolades from the audience.

In short, a masterly performance of one of last century's masterpieces.

The background image on this page consists of blurred lines of random colours, created by Keith Bramich on 7 March 2019.