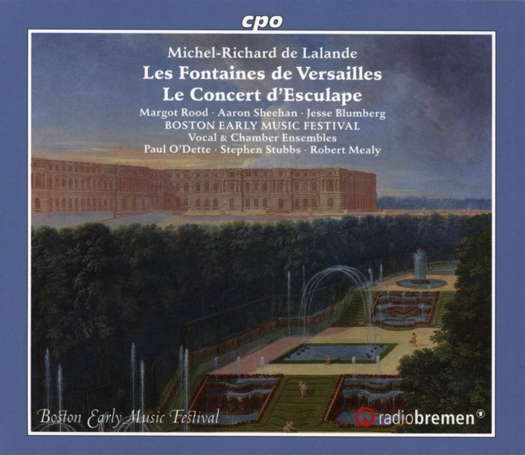 The Sweetness of Life

'The instrumental ensemble, playing period instruments or a violin manufactured in 2011 but after period specifications, is excellent.'

Talleyrand was a man of many talents. He knew how to dress a new coat in line with the changes of the times and, especially, of politicians in power. He survived very well, always in high positions, from the ancient regime to the return of the Kings after the Robespierre's Terror and Napoleonic times. He used to say that only by those who lived before the (French) Revolution could fully appreciate la douceur de vivre (the sweetness of life). This CD is a sample of la douceur de vivre in the high times of Versailles when there were not even distant rumours of Revolution and the Roi Soleil was in full control of the Kingdom, also because all the aristocrats of some importance were living in a golden prison – Versailles itself.

In this magazine, I have often reviewed French baroque music revivals, frequently produced by Palazzetto Bru-Zane - Centre de musique romantique française. This CD is not a fruit of their research but of the Boston Early Music Chamber Festival Ensemble. This American ensemble was founded in October 2008 and has received several awards. Its musical directors are Paul O'Dette and Stephen Stubbs, its concert master Robert Mealy. The ensemble does not specialize in French music but performs all around Baroque music. The ensemble stages opera too; Les Fontaines de Versailles was fully stage in Boston in 2016.

A few words on Michel Richard de Lalande (15 December 1657 – 18 June 1726). He was a French Baroque composer and organist who was in the service of King Louis XIV. He was one of the most important composers of grands motets. He also wrote orchestral suites known as Simphonies pour les Soupers du Roy and ballets.

Born in Paris, he was a contemporary of Jean-Baptiste Lully and François Couperin. De Lalande taught music to the daughters of Louis XIV and was director of the French Chapel Royal from 1714 until his death at Versailles in 1726.

De Lalande was arguably the greatest composer of French grands motets, a type of sacred work that was more pleasing to Louis XIV because of its pomp and grandeur, written for soloists, choir and comparatively large orchestra. According to tradition, Louis XIV organized a contest between composers, giving them the same sacred text and time to compose the musical setting. He alone was the judge. De Lalande was one of four winners assigned to compose sacred music for each quarter of the year, the other composers being Coupillet, Collasse and Minoret. De Lalande's was the most important quarter of the year because of the Christmas holiday. Later he had full responsibility for the Church music for the complete year. At his death, since he left no mass of his own, the 1656 Requiem of the Dukes of Lorraine by Charles d'Helfer was sung.

In addition, at least four collections of his works exist, each displaying different looks at the composer's work as viewed by the people who assembled each collection.

Scholarship of de Lalande's work was for many years hindered because of inconsistencies in the spelling of his last name: de Lalande, Lalande, la Lande, de la Lande and others. The family wrote the name as 'Delalande'. Finally, in 2006 the definitive 'Thematic Catalogue of the Works of Michel-Richard de Lalande (1657-1726)' by British musicologist Lionel Sawkins came out, which runs to 752 pages containing over three thousand music examples and details of performing requirements and of all source materials, as well as with comprehensive indexes and thematic locators.

The CD includes three different pieces: Les Fontaines de Versailles is a short opera-ballet to acclaim the King's arrival in Versailles, le Gran Pièce en G-Ré-Sol is a chamber music concert and Le Concert d'Esculape is a celebration of the King's recovery after an illness. They are occasional pieces in the sense that each was conceived and composed for a specific occasion. Each was meant to please the King and his retinue by setting his power and pomp in a mythological context. In the three scores, there is neither the drama nor the tension of the period such as, for instance, in the works of Jean-Philippe Rameau. It is Court music to underscore the sweetness of life (at Versailles).

In Les Fontaines de Versailles this is completely clear from the very beginning, the short overture on track 1, and it is magnified in the trio with chorus, track 14 and of course in the Finale.

In the Concert, the charm of life in Versailles is caught especially in Esculape and in the movement for violins and flutes.

The instrumental ensemble, playing period instruments or a violin manufactured in 2011 but after period specifications, is excellent. The vocal ensemble has well set voices - especially the sopranos and the mezzo - but the French diction is far from perfect as often happens when non-native French singers have to cope with French repertory and pronunciation. No doubt, they will score better with baroque in phonetic languages such as German or Italian.

The background image on this page is derived from the oil-on-canvas painting Bosquet des trois Fontaines-vue de face at Versailles by Parisian painter and engraver Jean Cotelle the Younger (1642-1708). This is the same image used on the cover of the reviewed CD.