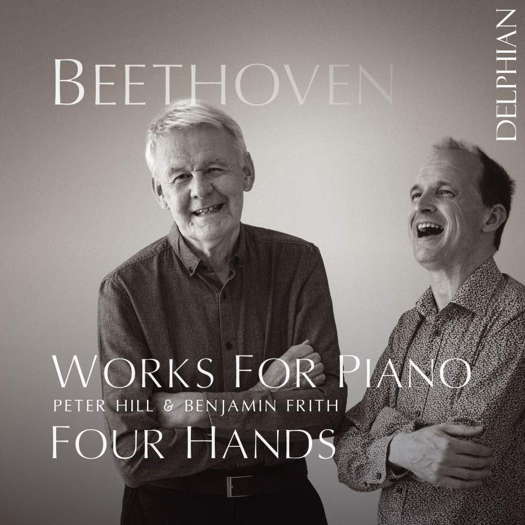 The piano was always Beethoven's favourite instrument. He wrote thirty-two sonatas for the instrument as a solo, and his composing for piano accompaniment in sonatas for other instruments, such as the violin and cello, is considered as masterly as in the solo works. Still, few are aware that throughout his early career, and later, the great master wrote a few pieces for piano duet. Beethoven's output in this genre may be small, as indeed it is, but this takes nothing away from the quality, interest and variety of the works he did compose.

Together they show Beethoven's development as his career unfolded, and even in these mostly early compositions there is already the germ of things to come. Indeed this disc groups together the whole set, and apart from the transcription of the Grosse Fuge, Op 134 (1826), the other four works were all written in the space of eleven years, starting with the Waldstein Variations of 1792 and concluding with the Three Marches of 1803, the year of the Eroica.

In between Beethoven indulged in the Sonata in D of 1797 and the Ich denke dein Variations of 1799.

Beethoven was extremely fastidious in everything he wrote, and he never took the trouble to put pen to paper if he was not sure there was a specific person who could perform the work. Longtime duo partners Peter Hill and Benjamin Frith would have been snapped up by the master had he still been around. Well, he is still around and affecting our lives, isn't he?

The Grosse Fuge apart, which is a veritable tour-de-force of pianistic brilliance, the rest of the programme is performed with an agility and lightness of touch that almost makes the music float, a typical characteristic of all Beethoven's works up to the point when deafness started setting in circa the turn of the nineteenth century. A splendid project, coinciding with the 250th anniversary of the birth of the genius from Bonn; devotedly recorded, impressively executed, rewardingly researched.

The background image on this page is derived from the 1827 wash-on-paper painting of Ludwig van Beethoven's workroom by German painter Johann Nepomuk Hoechle (1790-1835).