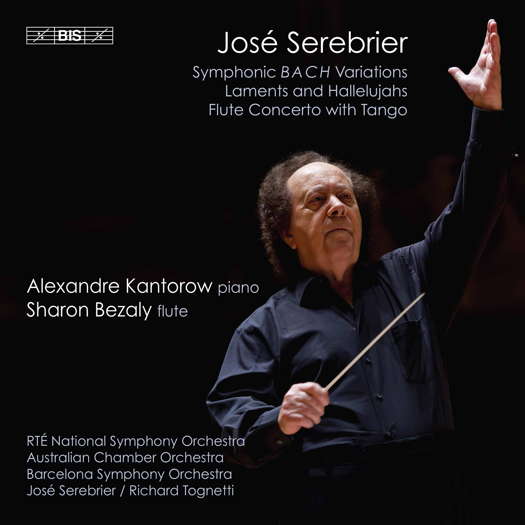 '... I was very much taken by the imagination, colour, rhythm and neo-classical expressiveness of the music, particularly in the "tango" pieces ...'

Born in Montevideo, Uruguay in 1938 of Russian and Polish parents, José Serebrier is undoubtedly one of the most accomplished musicians of the last sixty years. Indeed, his dual roles of composer and conductor have made him one of the most sought after musical artists of his age, and deservedly so. During his long career, Serebrier was the recipient of many prestigious awards, among which are the Koussevitzky Foundation Award, the BMI Young Composers Award for his First Symphony and Saxophone Quartet, and two Guggenheim Fellowships when he was nineteen and twenty. He also received a US State Department Fellowship to study composition at the Curtis Institute of Music with none other than Bohuslav Martinů, Vittorio Giannini and Aaron Copland. Graduating in composition at Minnesota University, he received his MA in composition and conducting following studies under the famous Antal Doráti.

Glittering stuff so far, but many more accolades followed, the most important being Leopold Stokowski's choice to name him associate conductor of the newly formed American Symphony Orchestra at Carnegie Hall when just twenty-two, a post he held for four years. Following Stokowski's return to England, another legend of the baton, George Szell named Serebrier composer-in-residence of the Cleveland Orchestra for two seasons.

Listening to this CD, which incidentally introduced me to Serebrier's music for the first time, I was very much taken by the imagination, colour, rhythm and neo-classical expressiveness of the music, particularly in the 'tango' pieces, where the composer's flair for South American melodic turns really comes to the fore.

Unfortunately, due to space constraints, I cannot delve into the programme with detailed explanations, so my advice is to read the composer's descriptions of each piece before you listen, and your understanding and appreciation of the music will be greatly enhanced.

An appealing issue, dedicated to one of today's truly versatile musical minds. Sound and presentation are first-rate.

The background image on this page is derived from a nineteenth century painting of the start of Uruguay's Oriental Revolution by Uruguayan painter Carlos María Herrera (1875-1914).