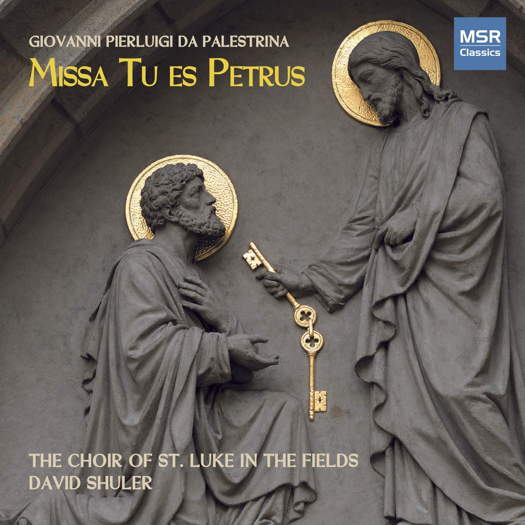 'David Shuler and his choristers deliver interpretations of sheer beauty brimming with natural and musical phrasing, spot-on-intonation and a glorious tonal blend ...'

Giovanni Pierluigi da Palestrina was born in the town of Palestrina near Rome 'circa' 1525. Documents hint he first visited Rome in 1537 when he is included as part of the choir of Santa Maria Maggiore. Palestrina nurtured his musical beginnings under the influence of two outstanding exponents of the Northern European style of polyphony: Guillaume Dufay and Josquin des Prez. Indeed, Italy itself had yet to produce a composer of true stature in the art of polyphony. In 1551 Pope Julius III appointed the composer 'maestro di cappella' of the 'Cappella Giulia' and his first compositions were all dedicated to this pontiff. During the next decade, Palestrina occupied many similar prestigious positions, notably in St John Lateran and St Mary Major. In 1571 he returned to the Julian Chapel, where he remained till the end of his life.

The decade of the 1570s was a time of great suffering for Palestrina. He lost his brother, two of his sons and his wife in three separate outbreaks of the plague. During this time he was considering becoming a priest, but instead he remarried a wealthy widow. This gave him financial independence and he was able to compose prolifically till his death. He died in Rome of pleurisy in 1594, leaving behind for posterity 105 masses, 68 offertories, some 140 madrigals, 300 motets, 72 hymns, 35 magnificats, 11 litanies and 4 or 5 sets of lamentations - an output that takes your breath away.

Palestrina's style of writing is never rigid or static, thus allowing the music to flow with a dynamic sweetness that consistently uplifts. The melodies contain few leaps between notes, and whenever a leap occurs it is always small and immediately countered by a stepwise motion in the opposite direction. Dissonances are at a premium, and whenever they appear they are always confined to suspensions, passing notes and weak beats. Above all, Palestrina's musical phrasing always followed the syntax of the sentences, a device not always observed by earlier composers.

The Motet and Mass 'Tu es Petrus' are both magnificent pieces, masterfully crafted and grandiose with a pervading sense of joy, while the rest of the motets that fill this issue offer a protracted traversal of the Church's liturgical year in music that is filled with a longing for the presence of God and that undying happiness that man hopes to experience after his departure from this world.

David Shuler and his choristers deliver interpretations of sheer beauty brimming with natural and musical phrasing, spot-on-intonation and a glorious tonal blend, and never for a moment does Palestrina's polyphonic writing fail to touch the heart.

Sumptuous sound and gorgeous presentation are truly the final icing on the cake.

The background image on this page is derived from the frontispiece of the 1554 Missal Book of Giovanni Pierluigi da Palestrina, depicting the composer presenting to Pope Julius III a work dedicated to him.