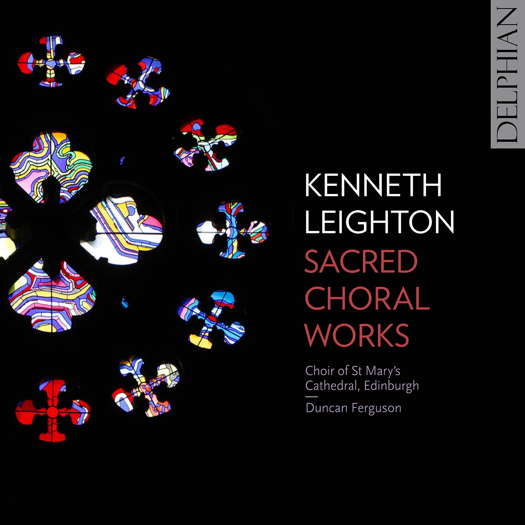 'Performances are of a consistently high level throughout and blessed with a beautifully recorded sound.'

Kenneth Leighton (1929-1988), one of England's greatest composers of twentieth century sacred choral music, started his academic career in Oxford in 1947 where he read Classics. But from his second year he concurrently started studying for a B Mus. His composition tutor, Bernard Rose, showed Leighton's work to the celebrated Gerald Finzi, who in turn strongly encouraged the budding composer, following performances of his Symphony for Strings (1948-49) and Veris Gratia, a suite for oboe, cello and strings (1949-50). Having been awarded the Mendelssohn Scholarship in 1951, he completed his studies with Goffredo Petrassi in Rome. From then onwards he rapidly established his reputation composing in all genres, including opera, symphonies, concertos, chamber and instrumental works and, above all, choral music which was in his DNA, having sung in the choirs of Holy Trinity Church and Wakefield Cathedral (his place of birth) when he was a boy.

This collection of choral music reflects the composer's outstanding achievements in this field across his entire career. It includes his earliest and last pieces for a cappella choir, three Christmas carols, two substantial extended works and, as expected, two works for the Choir of St Mary's Cathedral in Edinburgh. Due to time constraints I can only cover the two extended masterpieces, namely the Missa Sancti Petri and Crucifixus Pro Nobis, but this does not mean that the rest of the programme is somewhat inferior to these two works; indeed, there is much to satisfy one's spiritual yearnings in the remaining seven pieces.

The Mass is the penultimate of the eight settings Leighton composed and published. Commissioned by Peterborough Cathedral for its 750th anniversary, it was premiered on 4 October 1987 to great success. It is a masterly setting using the Anglican rite B, and overall the Mass reflects the composer's ambition to write simpler music that was more 'static', but perhaps more varied and relaxed, with greater emphasis on colour and harmony.

The Crucifixus Pro Nobis was described as a 'cantata', but in effect the work is a taut, miniature Passion in four movements. It is a predominantly austere creation, intense and dramatic, and despite its brevity, there is a building up of tension which borders on the undurable. The work was premiered in 1961 and consolidated Leighton's name at the forefront of English choral music in post-war Britain.

Performances are of a consistently high level throughout and blessed with a beautifully recorded sound. Another plus factor is the illuminating essay by Andrew Burn. A most welcome addition to the rather lean Leighton discography.

The background image on this page is derived from a detail of a stained glass window in Hereford Cathedral, photographed by Keith Bramich on 22 February 2020.