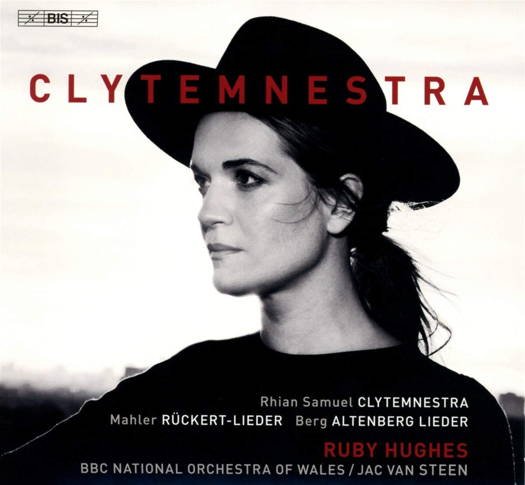 'Right from the start, she shows a more flexible and somewhat lighter voice, but a very good understanding of the lyrics, and she colours her voice beautifully to express this.'

Whilst I know the Rückert-Lieder well, I had only heard the Altenberg Lieder once before, and Clytemnestra was unknown to me, as was its composer Rhian Samuel. The musical forces employed on this disc are impressive, and a delight, and I was left very favourably impressed.

There are many famous recordings of Mahler's Rückert-Lieder available, and my immediate question was ... can Ruby Hughes compare, and does she offer a fresh interpretation? The answer to this in my opinion is ... Yes. Her voice is very pleasing, whilst not as powerfully used as many other singers of this work. Right from the start, she shows a more flexible and somewhat lighter voice, but a very good understanding of the lyrics, and she colours her voice beautifully to express this. She also articulates in such a way that underlies this, making full use of breath pauses and commas. The judgement on what speed to sing the various contrasting songs works very well too, from the almost breathless restlessness of the first one, to the almost static opening of the middle song. The songs are all brief, apart from the central 'Ich bin der Welt abhanden gekommen' and 'Um Mittertnacht'. I love the remoteness of this song and the warmth and poignancy of the second stanza. This recording realises this so well, and brought tears to my eyes.

'Um Mitternacht' was one of my favourite songs in my youth, and I am still very fond of it. It is the only song where the orchestra is briefly given full rein. In the other songs it functions very much as a chamber orchestra, either providing the opening atmosphere for the song, or weaving in an almost obbligato-like fashion in partnership with the singer. It is somewhat sinister, reminding me of some of the ghostly songs in Des Knaben Wunderhorn, quite bleak in places, but every so often, the moonlight comes in and warms the mood. In the final stanza, the brass bursts forth with timpani rolls, and the voice triumphally soars over the orchestra.

The last song, Liebst du um Schönheit, rounds off the set. It was not originally orchestrated, but Max Puttman orchestrated it a few years after Mahler's death, much to Alma Mahler's dismay. She felt it was intended as an intimate and personal message to her and not meant to be performed as a concert piece. It is a tender and warm piece, and I think it is not at all out of place, and rounds off the set nicely, although I have heard recordings where it appears earlier and the set ends with 'Um Mitternacht'. I thing both approaches have merit. The orchestral playing by the BBC National Orchestra of Wales, conducted by Jac van Steen, is as fine as I have ever heard, especially the solo winds and brass. I am very pleased with this recording.

Alban Berg's Altenberg Lieder, Op 4, are not often performed. Apart from the first performance in 1913, where the set received a riotous reception, there wasn't another complete performance until 1952, but the work has enjoyed more frequent performances since, most notably by Jessye Norman - the only other recording of this work I have heard. The five songs are brief and the musical style certainly points back to Mahler in its orchestration, but also firmly points to the composer's future direction as a leader within the second Viennese school.

There is an extensive orchestral introduction in the first song before the voice enters, and the vocal part is brief before the orchestra ends the song. The second is more reflective and the voice is used more extensively, but it is just over a minute long as are the next two songs. In these three short songs, the orchestration is reduced and delicate. Ruby Hughes has an innate grasp of this music and the words. The final song, 'Hier is Freide' (Passacaglia), is the longest, and ends quite abruptly.

The final work here is the very impressive Clytemnestra by Rhain Samuel, commissioned and performed in 1994 by the orchestra on this disc, the BBC National Orchestra of Wales. The composer has written clear notes in the booklet and I certainly enjoyed this work immensely.

The first movement deals with the speed of the message relayed from Troy, relaying the victory over the city and that the Greek warriors would be returning. The language, whilst being modern ands at times quite dense, is not out of place with the other two works presented on this disc. The orchestral palate used is colourful and impressive, and the orchestra is let loose much more than in the other two works. It would be easy for such forces to overpower the singer, but in this case it certainly does not. Ruby Hughes' dynamic control is quite wide, and her pitching is accurate and diction very clear without being over enunciated.

The second is a lament by Clymnestra for her husband King Agamemnon. She is eagerly awaiting her husband's return and has missed him. The vocal part predominates in this movement, where the orchestra occasionally interjects rather ominously, it accompanies the vocal line.

The next movement welcomes the arrival of Agamamnon. It is fanfare-like in places, heavy with brass and percussion. One does have the feeling that something ominous might happen, and this is sometime before the singer enters. The colour crimson is ominously announced with the orchestral writing, as are the lines 'Justice herself leads you to a home you never hoped to see'.

This leads straight into the fourth movement, 'The Deed', where Clytemnestra kills Agamanon because he had promised the gods, in return for a safe trip and favourable winds, to sacrifice the first thing he saw on landing. Gods are tricky capricious creatures and unfortunately it was his daughter than he had to sacrifice. This is a solely an orchestral piece, that features also solo work by a bass guitar. It is discordant and chaotic, as one might expect.

The following movement is Clytemnestra's confession, but there is no regret here. And this is followed by 'Defiance', where she challenges his lords for not having stopped or challenged Agamemnon, or banishing him. The orchestral writing is delicate, allowing the voice full rein in accusation.

The Epilogue follows - a dirge that sorrowfully reflects upon the loss of her daughter upon the sword of her husband. With this, the whole sorry event closes.

This is quite an astounding and powerful work, and certainly is one example of the depth of music being created currently in the UK.

The soloist is truly splendid with a beautifully clear silver tone no matter the volume, a good clear diction and a total understanding of the phrasing within the words. The orchestra is really outstanding as is the conductor's direction in three works which are complex and varied in nature. A must buy disc.

The background image on this page is derived from Klytemnestra (1925) by Hungarian-born British illustrator, painter, and poster artist Vera Willoughby (1870-1939).