RECENT: Come and meet Eric Fraad of Heresy Records, Kenneth Woods, musical director of Colorado MahlerFest and the English Symphony Orchestra and others in our hour-long March 2021 video.

To the majority of the musical public, Malcolm Williamson was an Australian-born composer who scooped the honour and title of Master of the Queen's Music. That he was better known to the music professional than the listener was, probably, due to the respect received from compatriots for both his keyboard virtuosity as much as his creative wizardry.

Nonetheless, he was an exceptional musician, writer and speaker. His legacy will serve to remind us of his brilliance for many years to come. 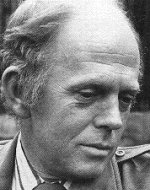 Born in Sydney on 21 November 1931, Williamson studied composition with Eugene Goossens at the Sydney Conservatorium. He moved to London in 1950, where he continued his studies with Irwin Stein and Elizabeth Lutyens. He was appointed Master of the Queen's Music in 1975 - the first non-Briton ever to hold the post. The following year, he received the CBE. Honours from his native Australia came later - an honorary doctorate from Melbourne University (1982) and the AO (Officer of the Order of Australia) for services to music and the disabled (1987).

A selection of articles about Malcolm Williamson

CD Spotlight. Musical Finesse - Songs by Gregg Kallor, recommended by Howard Smith. 'Go to the top of the class.'