American organist, lecturer, adjudicator and teacher Marilyn Mason was born in Alva, Oklahoma on 29 June 1925. She began studying piano at six, and organ when she was ten years old. She studied at the University of Michigan and joined the music faculty there in 1947, before she had graduated. She spent one summer in France, studying with Nadia Boulanger and Maurice Duruflé, and also studied for a PhD in Sacred Music in New York City, but apart from that, her professional life was spent almost entirely at the University of Michigan. She became chair of the organ department in 1962, and became a professor in 1965.

During her long career she gave an impressive performance of Schoenberg's Variations on a Recitative at the 1950 American Guild of Organists' National Convention in Boston, and performed the complete organ works of Johann Sebastian Bach. She commissioned more than seventy new works for organ, many of which form the Marilyn Mason Music Library (published by MorningStar). She travelled extensively, internationally, becoming the first female American organist to perform in Westminster Abbey, the first female organist to play in Latin America and the first American organist to perform at the Sayyid Darwish Concert Hall in Cairo.

Her extensive recordings include the complete organ music of Johann Pachelbel and rare performances of Satie and Schoenberg organ works. 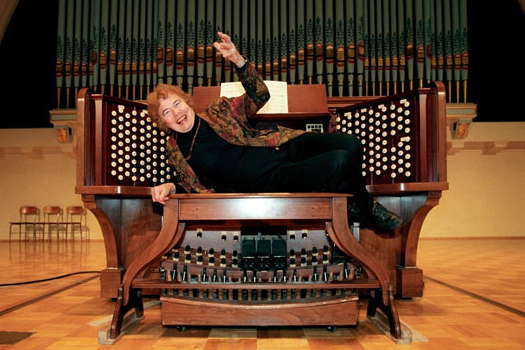 In 1985 a new C B Fisk organ installed in the Earl V Moore building at the University of Michigan School of Music was named the Marilyn Mason Organ.

Before retiring from the University of Michigan in 2014 after sixty-seven years, as the longest-serving faculty member, the symposium Teacher of Music, Teacher of Life was held in her honour in 2013.