The daughter of Irish-American vaudeville singers, Farrell was taught by her mother. She married a New York policeman and turned down work which took her away from her children. 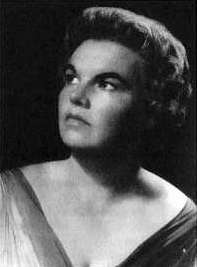 As one of the leading sopranos of her generation, with a voice known for its power and beauty, she sang at New York Metropolitan Opera from 1962 until 1966, including alongside Robert Merrill in Andrea Chenier.  She worked with Leonard Bernstein and the New York Philharmonic, dubbed the voice of opera singer Marjorie Lawrence in the 1955 Hollywood film Interrupted Melody and hosted a weekly radio programme on the CBS network.

Her forays into pop and jazz began in 1959 when she took over from a sick Louis Armstrong whilst performing the Verdi Requiem at Gian Carlo Menotti's Spoleto Festival in Italy. She made a success of her pop and jazz work, recording albums such as Here I Go Again for Columbia Records.

A selection of articles about Eileen Farrell

Profile. The State of the Art - Maria Nockin talks to soprano Christine Brewer