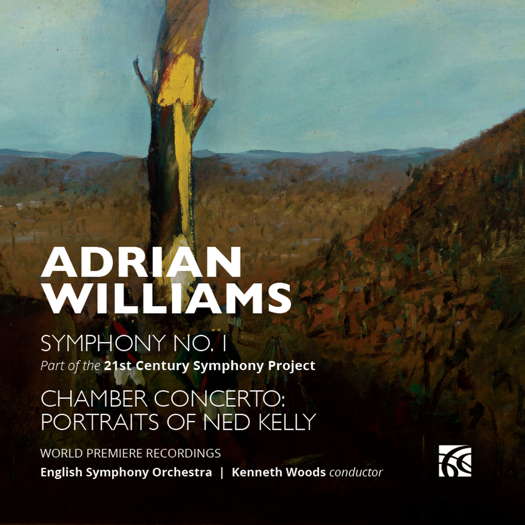 Symphony No 1 - 'The first movement is perhaps the most straightforward, being basically founded on two themes, the first of which appears on violins and violas at the outset and which is used whole or in part throughout the entire symphony. It appears triumphant near the very end of the finale together with that movement's own unique themes. The shorter scherzo is fairly rumbustious and virtuosic, harmonically dominated by major 2nds and 3rds and combinations of these. At about this time I saw the harrowing images of the wild fires in Australia, so much tragic loss of life, loss of habitat, the koalas rescued, many of which were so badly burned they were unable to survive. These images so affected me that the emotional impact found its way into the third (slow) movement, which I see as an extended lament or memorial. I felt the impulse to include two long, still sections featuring basses; the deathly, lifelessness of the forests after the fires. The Finale needed an injection of energy from its opening bars. I knew I wanted the movement to reach towards a tumultuous conclusion and this would be a slow process of development from a wistful solo violin theme, the forward energy being held back for some six minutes, thereafter inching its way to a point of no return.' - Adrian Williams.

Portraits of Ned Kelly, Chamber Concerto: 'This remarkable work grew from Adrian Williams' friendship with, Sidney Nolan, the great Australian painter. They were neighbours in the Welsh Borders region for most of the last forty years. Williams was given the invitation to use the piano at Nolan's house, The Rodd, now the home of the Sidney Nolan Trust. The Chamber Concerto is a musical response to Nolan's most famous series of paintings, which depict scenes from the wild life of Australian bush-ranger, Ned Kelly, an outlaw, gang leader and convicted police-murderer who rampaged across Australia in the years prior to his arrest and execution in 1880. While the work is not strictly programmatic, the musical action does correspond in large part with the story of Kelly's adventures, including his early criminal endeavours, his fierce encounters with the police, his capture, trial and execution. Kelly was the only member of his gang to survive their final encounter with law enforcement due to his use of a homemade set of body armour, which Nolan depicts to great effect in his images of Kelly. Williams' music almost always has a virtuosic edge to it, but the demands placed on the musicians in this work are truly extraordinary, yet it is incredibly rewarding to play. In this sense, Williams' designation of the work as a concerto is both telling and apt is it demands that everyone in the ensemble contributes their utmost in rhythmic precision, agility, accuracy in extremes of register and lyrical storytelling. A useful comparison might be made with Richard Strauss's Till Eulenspiegel. Williams' work is darker, stranger and funnier than Strauss's with a pronounced surreal quality, but like its predecessor, it also becomes deeply poignant in its final pages.' - Kenneth Woods