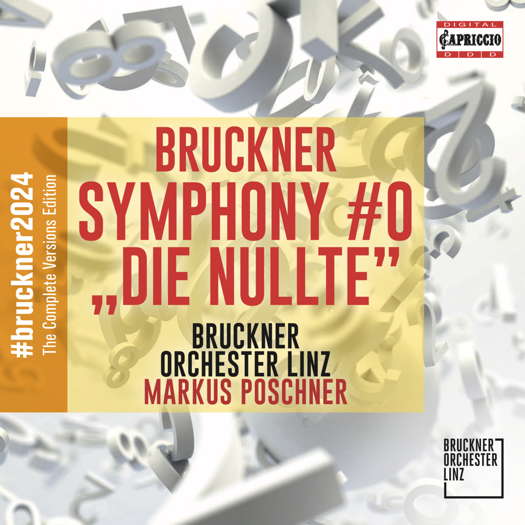 This third release in Capriccio's Bruckner Symphonies Edition features the Symphony in D minor ('Die Nullte') performed by the Bruckner Orchestra Linz under Markus Poschner. Although the work did not belong to the corpus of nine numbered symphonies which the composer had identified in his will as worthy of preservation in the Imperial Library, and for which he is best remembered, he did not destroy it. He was hoping, perhaps, to ensure that future generations would assess the symphony in what he considered its proper perspective, having written annotations at various places in the manuscript: 'invalid' [ungiltig], 'completely void' [ganz nichtig] and 'annulled' [annuliert]. Capriccio's new Complete Bruckner Symphonies edition reassesses these enduringly enigmatic and complex works. Presented by the Bruckner Orchestra Linz and the ORF Vienna Radio Symphony Orchestra, and featuring all nineteen available versions, the cycle is scheduled for completion in 2024, which marks the 200th anniversary of Bruckner's birth.