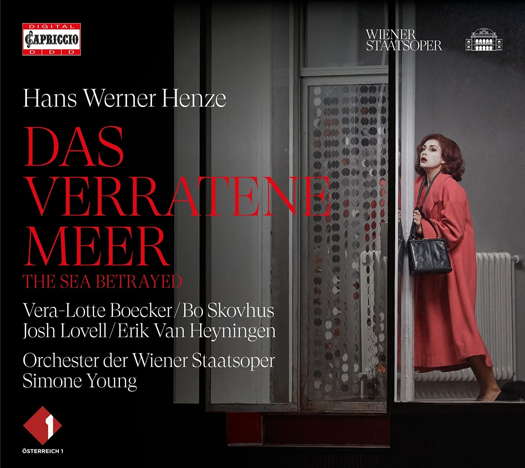 Sex, Jealousy and the Sea

'Simone Young and the Vienna ensemble render it beautifully.'

Hans Werner Henze (1 July 1926 - 27 October 2012) was a very important German composer of the second half of the twentieth century and the beginning of the 21st century. He started to compose when he was very young and continued almost until his death at the age of eighty-six. His large number of works is extremely varied in style, having been influenced by serialism, atonality, Stravinsky, Italian music, Arabic music and jazz, as well as traditional schools of German composition. In particular, his stage works reflect his consistent cultivation of music for the theatre throughout his life.

He is best known as the composer who brought serialism to the general audience. His opera and music dramas were and still are quite popular and often performed in Europe, the United States and Japan. He lived most of his live in a villa and farm near a small town close to Rome and organized an innovative festival in Tuscany. He is known for his political ideas too: an avowed Marxist and member of the Italian Communist Party, Henze produced compositions honoring Ho Chi Minh and Che Guevara. At the 1968 Hamburg premiere of his requiem for Che Guevara, titled Das Floß der Medusa (The Raft of Medusa), the placing of a red flag on the stage sparked a riot and the arrest of several people, including the librettist. Henze spent a year from 1969 to 1970 teaching in Cuba.

Das verratene Meer (The Betrayed Sea) is an opera in two parts and fourteen scenes, to a German libretto by Hans-Ulrich Treichel, after Yukio Mishima's novel The Sailor Who Fell from Grace with the Sea. Composed between 1986 and 1989, it was Henze's ninth opera and his third commissioned by the Deutsche Oper Berlin. There are three versions of the opera: the original 1990 Berlin version, a revision in Japanese (titled Gogo No Eiko, as is Mishima's novel) performed in Far East theatres in 2003-2005, and the 2020 posthumous Vienna premiere that incorporates most of the additional music written for the Japanese version.

The CD is based on the Vienna performances and includes a very useful booklet on the history of the opera as well a synopsis of the three versions. The Vienna revival is a clear indication of how Henze was and is still popular. His one act tragedy, The Bassaridis, was revived in Rome in 2015 and in Salzburg in 2018, and I reviewed it for Music & Vision Magazine. I still remember the Rome premiere of Boulevard Solitude, an opera based on a modern reading of Manon Lescaut, which caused enthusiasm as well as riots; not long ago, Boulevard Solitude was revived in Genoa, Madrid and other opera houses.

Das verratene Meer is not a political opera, but a drama about sex, jealousy and the sea - seen as an escape that, however, alienates from the land. In short, a Mishima black-and-blue novel. The plot is quite simple: A widow falls in love with a sailor. Her teenage son (who is part of a youngsters' gang) is jealous and, with his friends, traps the sailor in order to poison him. The first part of the opera takes place in the Summer; the second in the Winter. A series of orchestral interludes depicts the different seasons and delves into the characters' inner feelings.

The principals are Vera-Lotte Boecker, a dramatic coloratura soprano, as the widow, the well-known Danish baritone Bo Skovhus as the sailor and the young Canadian lyric tenor Josh Lovell as the widow's son. A mezzo, a baritone, a tenor and a countertenor are the members of the youngsters' gang. Simone Young conducts the Vienna Staatsoper orchestra.

The mood of the drama is clearly set from the mother and son duet and the interlude on tracks 1 and 2 of CD1.

This is followed by a sensual duet between the widow and the sailor on tracks 3 and 4 of CD 1.

The son's jealousy is clearly shown on CD1 track 9 followed by an interlude on track 10.

The youngsters' gang is cleverly introduced on CD1 tracks 13 and 14 and concludes the first part (CD1 track 17).

Thia is followed by a New Year love scene between the widow and the sailor (CD2 tracks 2 and 3).

Then the drama presses until the final scene when the sailor tells the youth group about his life and his loneliness; nevertheless, they kill him.

As always in Henze's work, the orchestration is very sophisticated. Simone Young and the Vienna ensemble render it beautifully. The three principals are very good in handling Henze's acrobatic vocalisms (with occasional reference to baroque opera).

In short, this is a recording worth listening to several times to discover all the gems of Henze's composing.

The background image on this page has been derived from the Symbolist painting Cliff by the Sea (1905) by Lithuanian artist Mikalojus Konstantinas Curlionis (1875-1911).