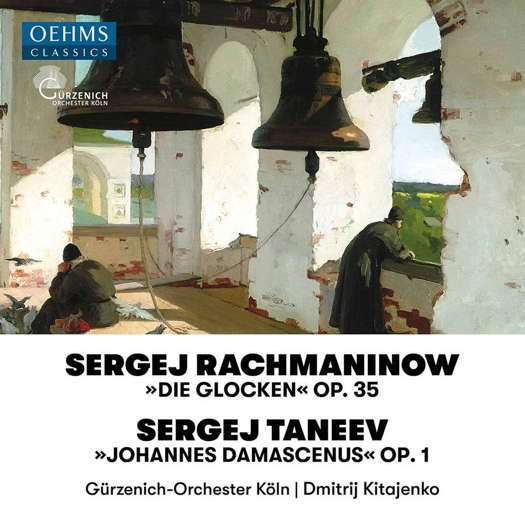 Full disclosure: The Bells was my first 'real' Rachmaninov piece - not a ringing piano concerto or a lush symphony - and, if you only know the composer from those familiar works, it will be a revelation. It's basically a cantata, though it follows a standard four-movement symphonic structure, and Rachmaninov tagged it as a 'choral symphony'; its text is based on a poem by Edgar Allan Poe, via the poet Konstantin Balmont's free rendering into Russian. (Performances in English adopt Fanny S Copeland's equally free translation of Balmont's Russian - the whole thing becomes sort-of-Byzantine.) The writing for solo and choral voices is idiomatic, and the orchestrations - variegated in colour, register and density, rather than conventionally lush - are unlike anything else in the composer's output.

Here, a Russian conductor, Dmitrij Kitajenko, leads a German orchestra and a Czech chorus in a colourful, engaged reading of the score, drawing out the score's ever-changing character, from the first movement's evocation of sleigh bells and general wintry joy, through the second's paean to youthful love and the third's hair-raising terror, culminating in a death-finale that gradually settles into repose. Tenor Dmytro Popov's warbly opening 'Slyshysh' (Listen) sounds tentative, but he rings out in the proclamatory phrases. I rather liked Anna Samuil's vibrant, squillante soprano in the bridal solo, better controlled in the climaxes than the oscillating Yelizaveta Shumskaya (with Kondrashin, Melodiya and various licensings).

I didn't hear anything particularly special about baritone Vladislav Sulimsky's finale solo, but neither does he do anything wrong: he's solid and serviceable.

That Kondrashin recording from long ago has, until now, remained my yardstick for the piece, but Kitajenko's account now takes pride of place. It's true that the well-behaved Czechs don't approach Kondrashin's Moscow group either in the first enthusiastic choral entry, nor in the terrifying wails at the start of the Presto, which leave you reeling. Otherwise, Kitajenko's excellent control and equally compelling musicality handily outpoint Kondrashin, eschewing the latter's overlay of superfluous intensity, as well. Kitajenko is particularly heartfelt in the cautiously affirmative final postlude.

Sergei Taneyev's John of Damascus makes quite the stark complement to the Rachmaninov. Where The Bells is lively and secular, Taneyev's cantata, based on excerpts from a poem about the eponymous Christian monk, is metaphysical and meditative. The sustained, modal opening, with wind chorales answered by octave strings, suggests Orthodox chant, maintaining an air of reverent dignity as the textures expand through the orchestra and chorus.

The brief Andante sostenuto is a quiet a cappella chorale; an abrupt chordal punctuation from the orchestra launches an angular choral fugue, before the music, like Rachmaninov's, settles peacefully.

Kitajenko and his forces sound equally committed in this unfamiliar score; the chorus is good, though the a cappella passages are not impeccably tuned.

The engineering is vivid, deliciously layering Taneyev's wind-over-string textures. The trilingual notes are thorough and informative, but the Russian texts are translated only into German - no English there.

The background image on this page is coloured shapes with zoom blur, created by Keith Bramich using Graphic Converter and Gimp.