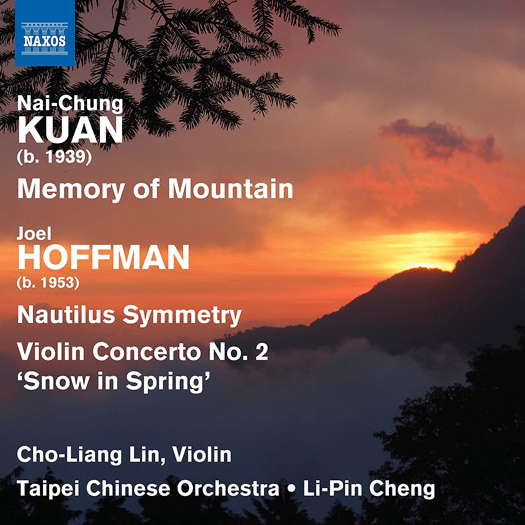 To see both a Beijing native and a Canadian releasing music together seems a unique and strange matching, having not that much in common. But after a listen, one notices the theme of play between the instruments and musical elements of Chinese and western orchestras as the common album-binding theme. While the Chinese composer writes for western orchestra and the Canadian for Chinese orchestra, both Nai-Chung Kuan and Joel Hoffman present violin concertos which are colorful, illustrative and catch the listener's ear with their intriguing instrumentation. Internationally acclaimed violinist Cho-Liang Lin gets to shine as a soloist in both recordings.

The headline composer is Beijing born and raised Nai-Chung Kuan, having a massive decade-spanning career throughout which he has written over a hundred works for Chinese orchestra, making him a master in traditional instrumentation. The principal work on this recording is his violin concerto Memory of Mountain, written in 1991. It was originally composed for banhu - a traditional instrument of northern China that differs from the violin as it has only two strings and is held vertically. The dedication came to the composer's old friend Lu-Feng Ding, who was the banhu player. In 2006, this arrangement for violin was made.

Memory of Mountain explores three scenic topics of vivid inspirations the composer took from his visit to the Alishan Mountains in Taiwan - one of the most beautiful areas on the island. His experience of the magnificent scenery and rich culture of the place paints a concert of three beautiful and evocative musical pictures in the most accessible musical language: The Secret Tree in the Fog, The Train in the Mountain Forest, and Celebrating a Good Harvest Year.

Since the composer often uses traditional musical means of imitation, the piece from the beginning strikes one as very colorful, programmatic and illustrative, obviously so. The first movement gives an insight into the emotional response to the view of a peaceful special place - a Catholic church standing tall in the remote mountains in Allishan. The violin solo here seems as the sacred tree standing 'vigorous and straight' with the orchestra around as the mist lingering in the mountains. The soloist's melody shakes the entire orchestra like ripples in the water. The violin solo also sounds very light with sweet, even theatrical passages. The harmony of the whole performance has the magic of film-music - it is melodic, tonal and beautiful.

The second movement, The Train in the Mountain Forest, is a contrast to the first, starting with an evoked movement of a steam train, created by the joint efforts of violin and orchestra, with the brassy sound of the Chinese stringed instruments. The visual allusions are obvious, as it could even be used as a sonic background in adventure stories. In this music, action and emotion are put together as in a well-made Hollywood movie plot. The illustrative element seems the obvious storytelling-via-music tool, which is at the same time Chinese and Western.

The last movement, Celebrating a Good Harvest Year, is a cultural sketch with Chinese and Western sounds mixing together. Here the violin leads a celebratory conclusion with the hammering percussion of four timpani drums and xylophone, and the strumming of plucked instruments. It ends as very virtuosic, energetic and tense.

The composer of the second part of this CD is Canadian Joel Hoffman, coming from a thoroughly north American educational background. Even though his works draw inspiration from such diverse sources as Eastern European folk music, Chinese traditional music and bebop, he has always also been drawn to Chinese music. So much so that Joel Hoffman spends four months each year in Beijing, where he is special professor at the China Conservatory of Music.

His first piece presented on this recording is also his first work for full Chinese traditional orchestra. Nautilus Symmetry was composed as a 2017 Guggenheim Fellowship project. The title refers to the geometric structure of the nautilus shell from which the musical structure of the work is derived. It is certainly very unusual and brave for a Western composer to work with another culture's elements and to write for Chinese orchestra, experimenting with its distinctive qualities, bursting with instrumental color. Overtaken by Chinese influences, Joel Hoffman was focusing on the plucked string instruments section, which is very different from the tradition of the Western orchestra. Since the plucked instruments cannot play as loudly as the other sections, Nautilus Symmetry has a distinctive soft and delicate sound throughout.

Six months later, in 2018, Hoffman presented his second work for Chinese orchestra and the second piece of his on the CD - the Violin Concerto No 2, titled Snow in Spring. It is dedicated to a friend of the composer - musician Cho-Liang Lin, who performed the piece on the recording. In two contrasting movements - Andante and Allegro - the focus is on a series of nine chords, providing large-scale structure as well as contrast to the few traditional Chinese melodies, usually played by xiao and pipa, but both well-suited to the violin as well.

While exploring and mastering both Western and Eastern musical traditions, Hoffman creates a unique style, recognizable as his own. According to him the 'aim was not to express the idea of "East meets West"', and not to aspire to write 'Chinese music' or 'Western music for Chinese instruments'. The use of traditional Chinese melodies and plucked string instruments was a way for the composer to find his own voice inside these musical elements. The thinking inside the logic of the Chinese orchestra's structure prevented the translation between western and eastern elements. His musical language is abstract and avoids the stereotypes typical of Chinese music.

The eclectic score of all three pieces is performed and recorded masterfully by the Taipei Chinese Orchestra and violinist Cho-Liang Lin. Their highly effective performance was a colorful, sensitive expressive interpretation that elevated the pieces on the CD into two great violin concertos coming from China. An advocate of contemporary music, soloist Cho-Liang Lin has many fields of activity. He is both an internationally renowned performer, a creator, teacher and finally curator of music festivals. He does justice to these masterpieces, presenting a controlled yet sensitive, lyrical, delicate and gracious sound.

This recording presents a new musical experience of hearing a Chinese orchestra instead of a normal Western symphony orchestra. It is really impressive that both Chinese composer Nai-Chung Kuan and someone steeped in Chinese musical culture from the outside, as Joel Hoffman is, write for Chinese orchestra so well that with this CD they have come up with new repertoire pieces for all Chinese orchestras today.

The background image on this page has been derived from a scene from the Alishan National Park in Taiwan.