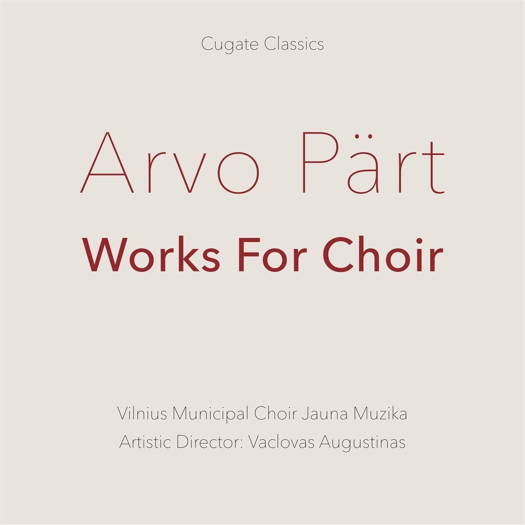 In the year 2020, a reissue of twelve Choir Works, including Magnificat (1989), Sieben Magnificat-Antiphonen (1991) and Summa (1990) by Arvo Pärt, was a beautiful quarantine surprise, presented by Vilnius Municipal Choir Jauna Muzika and its artistic diector Vaclovas Augustinas with their collaboration with Cugate Classics records. Music of this Estonian composer was already recorded by the Jauna Muzika back in 2003, as well as other his most beloved choral masterworks which have been already released on Cugate Classics. Thic CD focuses on the composer's creative period from 1989 to 1991. Recorded in Vilnius, Jauna Muzika presents several compositions for choir from this period.

Today Arvo Pärt is known as one of the most important and influential composers of our time and one of the most revered figures in modern classical music, with his audience reaching far beyond the regular attendants of symphony halls and influence way beyond the genre he works in. His creative period from 1989 to 1991 was marked with his new and self-developed tintinnabuli style (introduced to the world in 1976), which has become his famous trademark sound. The search for his own voice drove him into a withdrawal from creative work lasting nearly eight years. He studied plainsong, Gregorian chant, early music, musical mathematics and the emergence of polyphony in the Renaissance. At the same time he began to explore religion and joined the Russian Orthodox Church.

The music that began to emerge after this period was radically different and this new compositional principle has defined his work right up to today. Because of it, Pärt is often identified with the school of minimalism and more specifically, that of 'sacred minimalism' (along with contemporaries Górecki and Tavener). The music is characterized by simple rhythms, harmonies, often single unadorned notes, or triad chords that create an otherworldly sound. Frequently settings are for sacred texts, although he mostly chooses Latin or the Church Slavonic language. Due to his profound spiritual awakening and own unique composing style, Pärt has more than reaped a rich harvest of awards, honors, recordings and performances.

It's no surprise that this composer repertoire has been chosen for Vilnius municipal choir Jauna Muzika just now. Celebrating its thirtieth anniversary in the 2019-2010 season (founded in 1989), the collective has come a long way to maturity and has since won several prizes, among others six Grand Prix in sixteen international choral competitions around the world. It has accumulated versatile repertoire embracing works for choir a cappella from all epochs as well as vocal-instrumental masterpieces. Now Jauna Muzika is denoted as one of the foremost Lithuanian choirs, having faith in the power of art, the power of sharing music with the listeners and the might of kinship in music. Their newest CD with music of Arvo Pärt is forty minutes of enchanting, levitating musical experience. His unaccompanied prayers like meditations on spirituality, create a completely unique soundscape of space. The meditative basses and soaring soprano voices that resonate through eleven tracks will have people of all paths of faith appreciating.

The CD opens with The Beatitudes - a shimmering halo of slightly dissonant tones and low notes in the organ are both illuminating the text. Here Jesus tells his followers that the poor and forgotten are foremost in God's mercy and love.

The second piece - the hymn from the Canon of Repentance Nun Eile Ich Zu Euch (Now I Rush to You), has a syncopated feel, created by overlapping voices that tumble over each other.

Magnificat (1989) is a setting of the Latin Magnificat text for choir a cappella. It displays the most refined tintinnabuli technique, since structurally divided into six voices the work is the most interesting rhythmically and can also be formed by verse and tutti sections.

The fourth piece, Summa (1977), was initially described as gently rocked muted harmonic simplicities back and forth. Even though it was written as a choral work, later additional scoring for instruments was made.

The album concludes with the Great Antiphons, seven prayers sung during Advent, the month before Christmas. Because each prayer begins with 'O', these pieces are also known as the O Antiphons. They paint a portrait of humankind aching for redemption with the coming of Christ which has been promised to the patient faithful. Musically these expressive hymns are concise expressions of deep yearning. The first antiphon, 'O Highest Wisdom, come, while reaching end to end in sweetness and ring all ...' soars high on an uplifted melody, tolling with bell-like clarity at the suggestion of eternity. In the second a deep bass voices recall God's appearance to Moses in the burning bush. The antiphons grow in intensity, leading the faithful to Christmas Eve. 'O King of Nations, Come', a restless and impetuous antiphon, leads to 'O God among Us, Come', and the final prayer with its aching forward motion is slightly shrill and irritating.

All of the eleven pieces, composed between 1989 and 1991, were performed beautifully. It's difficult to overstate the genius of Arvo Pärt. Therefore this re-release is in keeping with one of the great bodies of work available today.

The background image on this page has been derived from the 1908 painting Sonata No 6 (Sonata of the Stars): Andante by Lithuanian painter, composer and writer Mikalojus Konstantinas Čiurlionis (1875-1911).